Ripped from the headlines

On the morning the United-Continental merger became official a few weeks ago, I happened to be flying United from its Terminal 1 at O'Hare airport in Chicago.

The pilot announced that changes were already underway. In fact, he said, the first plane had just been painted to show both airlines, and it was visible to our left.

Since I always take a window seat on the left, I was able to see what he meant: 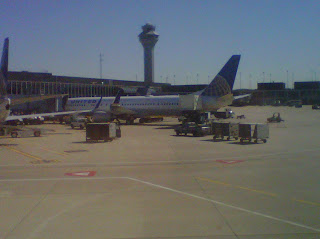