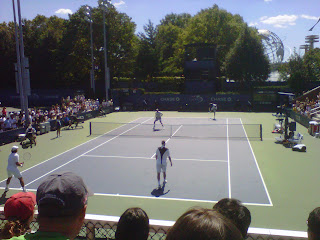 6'1" Mahesh Bhupathi and 6'5" Max Mirnyi are an imposing doubles team, but the Argentinian duo Eduardo Schwank and Horacio Zeballos managed to hit a lob winner over the Indian Davis Cup hero and the "Beast of Belarus" en route to an upset over the #4 seeds.


18-year-old American Ryan Harrison had quite a fortnight, earning a spot in the U.S. Open main draw by winning three matches in the qualifying tournament, then stunning 15th seed Ivan Ljubicic in the first round. His thrilling ride ended in the next match when he couldn't close out a fifth-set tiebreak against Ukraine's Sergiy Stakhovsky, losing the last five points after building a 6-3 lead. 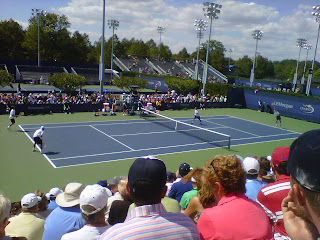 Still, he learned a lot and raised his ranking from 220 to 180.  Here he plays doubles with fellow American singles qualifier Robert Kendrick. 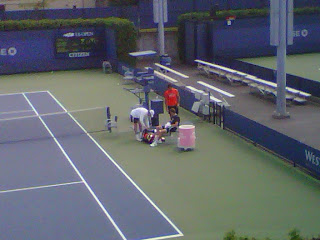 Even the #2 doubles team in the world needs to practice, and that's what Daniel Nestor and Nenad Zimonjic are doing here. 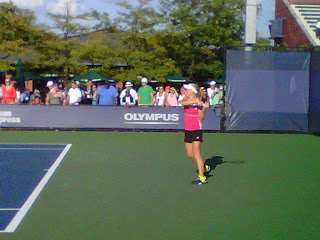 Last year's American teen sensation, Melanie Oudin, beat four straight Russians including Maria Sharapova and Elena Dementieva en route to a surprise appearance in the quarterfinals. Largely on the strength of that run, she entered this year's tournament ranked 43rd.
Here she hits a few practice balls with this 13-year-old kid, whose name I didn't catch but who looked good enough to win a few rounds himself: 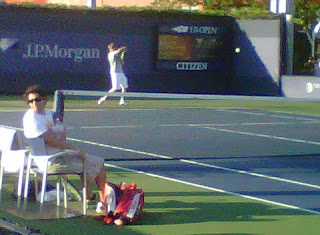 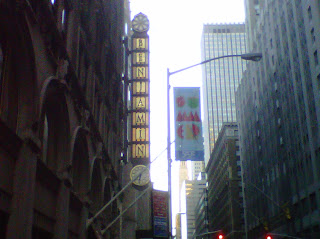 I didn't stay at The Benjamin, but I liked the name. 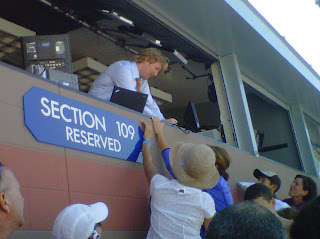 Jim Courier spent 58 weeks as world #1 and still holds the record for being the youngest player to have reached all four major tennis tournament finals (age 22). Plus, he just always seems like a good guy. Here he signs a few autographs after calling Gael Monfils' straight-set win over French countryman Richard Gasquet as part of CBS' Labor Day coverage. 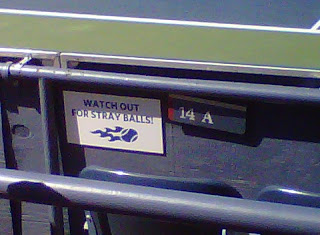 Good advice, though the 136 m.p.h. serves are less likely to clear the wall than the overheads are.
Built into the northeast corner of Arthur Ashe Stadium is an elegant restaurant called the U.S. Open Club. It's beautifully catered by Chicago's own Levy Restaurants and a welcome respite from all the punishing sunshine. 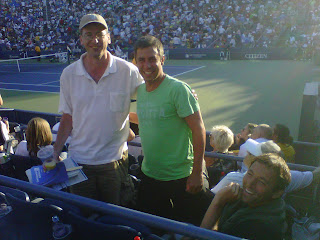 At their lunch buffet I ran into an old Wrigley Field vendor buddy and ended up joining him in his Louis Armstrong Stadium box for a few games. 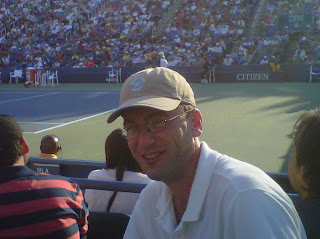 You get more nuance from a courtside seat than you do on TV. 2009 semifinalist Yanina Wickmayer  kept casting aggrieved glances toward her team, seated just in front of us, as she went down in three sets to the upstart Estonian Kaia Kanepi. 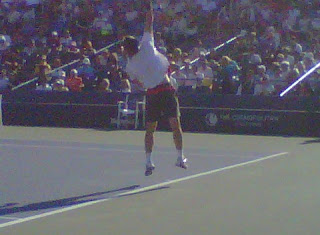 Minutes later, we heard the wind eerily whistling through the strings of huge-hitting #5 Robin Soderling as he took down Albert Montanes in four sets. Oh, does he crush it. 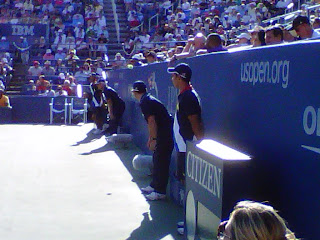 Another view from up close. 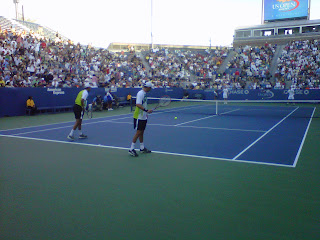 I've been lucky enough to see world #1 doubles team Bob and Mike Bryan play at three of the four Grand Slam tournaments. They recently supplanted Mark Woodforde and Todd Woodbridge as the winningest pair of all time and added to their résumé by winning this tournament for their 65th title.
Bob is the fiery, big-serving lefty, Mike is the steady, solid-returning righty, and together they're nearly unbeatable: their reactions are instantaneous, they're consistent as hell, and like the best improv teams they play with one group mind. I loved these guys even before Bob threw me a towel the other day. 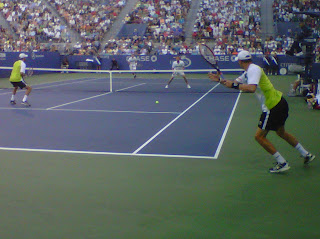 They put the lefty on the deuce court to get their forehands up the middle and the steadier returner on the ad side. Maybe if I did that instead of returning with my lefty forehand out wide, I'd get Bryan-like results. Maybe not. 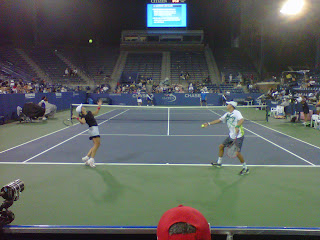 Bob and Liezel Huber justified their #1 seed by winning the mixed doubles tournament. In this quarterfinal match against Lisa Raymond and Wesley Moodie, they make things extra tough for their opponents by each serving a ball at the same time. 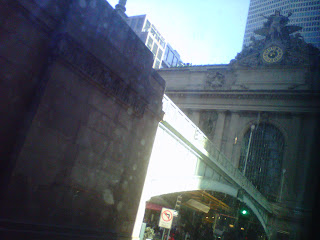 The next morning at Grand Central Station I hopped a shuttle to LaGuardia airport. A moment after I took this unintentionally arty photo of the iconic facade, Jim Courier jumped out of a taxi beside me. Much like when he played, the guy is everywhere. 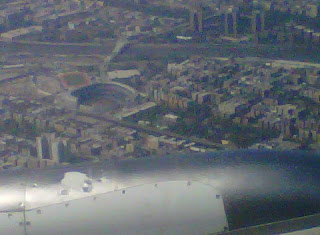 Appropriately for such a sporty trip, my return flight started with Yankee Stadium... 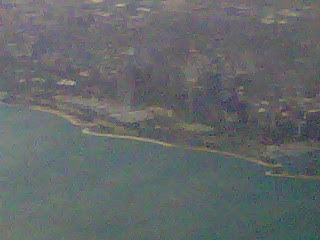 I hate it when my doubles opponents use that cheap dual serve trick!

Thanks for the details. Wish I had been there with you! Rose

I do want to follow you. Let's see if this works.

Thanks for checking in, guys.

Rose, as many sets as you and I have won together, we'd have our hands full against Geoff C. and pretty much whoever else he played with. If he didn't live in Spain he'd be dismantling us regularly.

p.s. Rose, though it would have been great to have you at the U.S. Open, you guys maxed out big time with that summertime tournament you hit in Switzerland. That is good living.