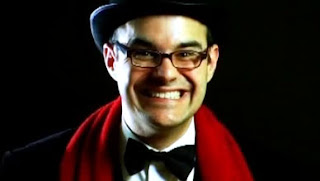 The great standup comedian Robert Buscemi lit up the Chicago comedy scene then, like so many before him, the Steve Carells and Frank Caetis, the Rich Talaricos and Sara Gees, moved on to Los Angeles.

But he's back this weekend headlining the Annoyance Theatre, Sunday night at 8pm.  A mere $8 gets you not just Buscemi's latest, but local stalwarts Marty DeRosa, Jet Eveleth, Brian Babylon and Jenni Lamb, an estimable quintet, to be sure.

Here's my Flavorpill preview of a past Buscemi appearance; other than the DVD taping, it equally applies to Sunday's show.