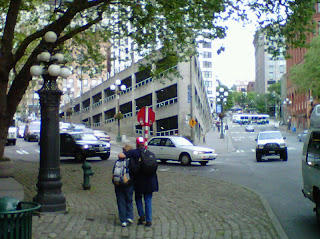 This Seattle parking garage appears to be rising from below the Earth's surface, in keeping with our Seattle Underground tour that just ended across the street.

Seattle has 30 or 40 downtown blocks that were abandoned after a 19th Century fire. The city filled in the streets and rebuilt over them, leaving a catacomb network of subterranean storefronts that serve as a ghostly reminder of frontier days past.

It's all somewhat confusing, so this seems like a good city for a puzzle convention.
Posted by Ben at 8:10 AM