Hawk in the Hall 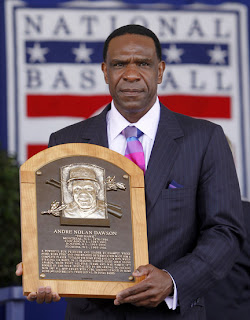 Getting inducted into the Baseball Hall of Fame is a fairly straightforward process.

First you put together an illustrious career worthy of enshrinement among the 200-some players in the Hall, a tiny number relative to the over 14,000 who have played in the major leagues, let alone those who have suited up at all levels of professional baseball.

Then you sit back and hope that the voting members of the Baseball Writers' Association of America take note.

From time to time a deserving player gets the cold shoulder, year after year falling short of the required 75 percent of votes cast. These candidates would do well to enlist the aid of this blog.

Take Andre Dawson, the five-tool outfielder who finally got his ticket punched yesterday in Cooperstown, N.Y. "The Hawk" was a National League Rookie of the Year, certified All-Star, eight-time Gold Glove winner and 1987 MVP whose worthy candidacy did not get its due during his first eight years of eligibility.

One of just three players with 400 home runs and 300 stolen bases (Willie Mays and his godson Barry Bonds are the others), Dawson could have used a World Series ring or two to bolster his case. His two decades toiling for the Chicago Cubs and Montreal Expos, plus the Boston Red Sox and Florida Marlins in their fallow periods, did not help.

Last summer, when the relatively limited Jim Rice was ushered into the Hall, a friend suggested that I write in this space about Rice's induction in light of Dawson's ongoing exile. And so I did (Andre Dawson and Jim Rice, July 30, 2009).

In the unlikely event that the Hall voters don't all read this site every day, I also lobbied a buddy of mine with a Hall vote. He writes about sports for the Chicago Tribune when not playing tennis or poker with yours truly.

And wouldn't you know it? In the first Hall vote after I took up his cause, Dawson got elected to the Hall of Fame (The power of the press, January 7, 2010). Bert Blyleven, you're next.

In yesterday's induction speech, Dawson displayed class and humility typical of his distinguished career. A transcript of his remarks is here.

Congratulations to an exemplary ballplayer and outstanding person on a well-deserved honor.
Posted by Ben at 6:00 PM

Thanks, Ben. Great to read this speech and learn about a great player.

Ron Santo now deserves to be inducted into the Hall of Fame.
Why does he not make it? Politics?

Great post. Lots of great stuff on your blog. Dennis Jackson said I'd enjoy your blog, and I do. I added you to my blog roll, for what it's worth. And I'll check in here often, I'm sure. -Don http://donsego.com

Thanks, Don. I'll check yours out as well.

Please say hi to Dennis for me. As you have surely noticed by now, he is pretty much the best guy ever.

@BG, there is an overwhelming sentimental case for Santo. He has always bled Cubs blue and to this day lives and dies with each win or loss, audibly groaning at every Cubs miscue as he calls games on WGN radio. He quietly played through the diabetes he kept secret throughout his career, eventually losing both legs to the disease. He now spends a lot of time and energy raising money to find a cure.

Sentimentality aside, he was also a hell of a ballplayer. Some have knocked Santo for failing to win a pennant or reach a key statistical benchmark such as 3000 hits or 500 home runs. His numbers were probably suppressed because his prime occurred during the pitching-dominant second half of the 1960s.

Many view him as "great, but not Hall of Fame great," but at least one informed observer disagrees. Statistics guru Bill James calls Santo one of the best 100 players of all time and says he's long overdue for the call to Cooperstown.