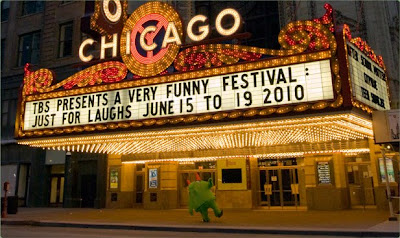 I used to hit Aspen, Colorado every March to attend the HBO U.S. Comedy Arts Festival, an annual celebration of the funny in all its forms. It was a highlight of my year, every year.

Back in the prehistoric days before I had a blog, I wrote about the 2007 Aspen festival for the website of my buds in the comedy group Schadenfreude (links to the four installments are here) and chipped in some jokes to the comedy site The Bastion here.

Sadly, all good things must eventually end, and the Aspen festival was no exception; the 2007 go-round was the last one. The reasons for its demise were many, and once I did have a blog I wrote about them here.

The Aspen festival left behind a lesser remnant in something called The Comedy Festival, a November showcase of big-name standups in Las Vegas. Nice enough, but a far cry from the diverse array of sketch, standup, improv, film, panels, special events, reunions, and fresh faces (not to mention mountains) in Aspen, and not worth traveling for.

Enter Just For Laughs, the other 800-pound gorilla on the North American comedy festival scene. Proprietors of an established, successful comedy throwdown in Montreal every July, they're now planning a major expansion of their brand. They'd like to become the premier presenter of live comedy in the U.S. in the way that HBO is known for the best comedy on television.

Last summer they did a trial run with a few weeklong comedy festivals in cities around the U.S., including Chicago. Our town scored big so they're back this year with the 2010 Just For Laughs Chicago Festival, which looks about a third of the way from Vegas to Aspen in its ambition and range. There's a lot of serviceable standup from well-known performers, but they've booked some more interesting one-off events as well. Plus you don't even have to get to Pitkin County, Colorado (although you do have to get to Chicago, jet-setting readership).

I'll be covering the festival this week for Flavorpill Chicago and presenting my picks here as the fest rolls on. But don't wait to hear from me, as tickets are moving fast and many shows will sell out; some already have.

You can check out the full festival lineup and buy tickets here.
Posted by Ben at 8:00 AM