I received the following press release on the evening of April 1: 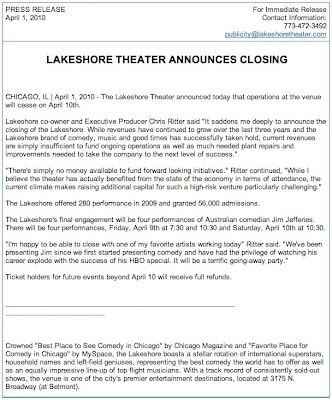 God, did I hope it was an April Fool's Day prank. Unfortunately, it was not.

The Lakeshore Theater has grown into an important part of Chicago's comedy scene, booking big national acts and offbeat niche artists alike, taking interesting chances and supporting any number of rising newcomers. The quality level has stayed admirably high, their every move suffused with an aspirational quality born of considering comedy an art form, not a mere commodity.

A lot of people appreciate how hard the Lakeshore crew tried to move live comedy away from the tired "two drinks and a cover charge" model. Working in a converted movie theater, the Lakeshore physically had more room to operate, and took advantage by booking a wider range of acts than just standups, though they had plenty of those.

One night was a rock band, the next a burlesque variety show, the next a touring event like Cinematic Titanic, the live stage show from the "Mystery Science Theater 3000" crew. From day one the Lakeshore's manifesto was: "You can just show up here and find something interesting. Trust our judgment and come on out." It was an ambitious philosophy but one they lived up to with more hits than misses.

Along the way, the Lakeshore Theater grew into a beloved institution around town. Second City is considered the gold standard here for sketch comedy; IO Theater is the home of long-form improvisation; ComedySportz plays short-form improv games. The Lakeshore, in the minds of many, is the place for everything else. Its closure is a big loss.

Here's to Chris Ritter, his wife Jessica, and the capable crew who built the Lakeshore into a major force in the Chicago arts community. I've enjoyed my many visits as both Flavorpill writer and comedy fan (on a good day, the two roles are barely distinguishable) and always found the Lakeshore staff to be complete pros. They'll surely get snapped up quickly by other theaters but I'll miss seeing them over at Belmont and Broadway.

It's not too late to stop by the Lakeshore one last time. Their run wraps up this weekend with the Australian comic Jim Jeffries, whose outrageous act I caught at the Lakeshore late one night during last summer's Just For Laughs Chicago Festival. He's a fitting way for the Lakeshore to go out because he typifies their credo: talented, unapologetic, hilarious and real.
Posted by Ben at 7:00 AM