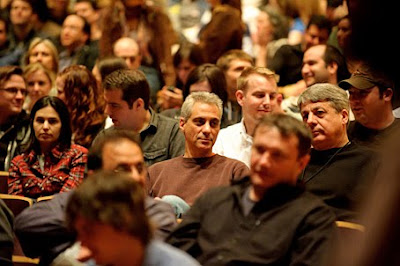 I have this old friend from the Chicago comedy scene. Let's call him Miles. He and his wife moved away years ago so he could attend grad school in New England. They later settled in greater Washington, D.C.
Miles and I have kept in touch and are regularly reconnected by a surprising number of mutual friends and common experiences. And though I started this site long after he left, he's been a loyal reader since day one.

Miles has great taste in, impressive credentials in, and deep knowledge about, the American arts scene. Among other things, he's a big Wilco guy. Having seen Uncle Tupelo repeatedly back in the day, I like them too, but Miles knows their stuff cold.

The other night, Miles caught a Wilco concert at a stately theater in Bethesda, Maryland. (He and I once joined a high school friend of mine at a Jeff Tweedy show at the Vic Theatre, after which a drunken ping-pong war ensued in my friend's basement, so this was the latest refraction of a shared experience.)

Miles wasn't the only Chicago expatriate at the show; he sat near my neighbor, White House Chief of Staff Rahm Emanuel. A photographer for the Washington Post snapped a photo of Emanuel in the crowd (see above), inadvertently also documenting Miles' attendance.
Miles reports that Rahmbo seemed particularly excited about the song "Via Chicago."
In concert: Wilco at Strathmore
[Washington Post]
Posted by Ben at 8:00 AM