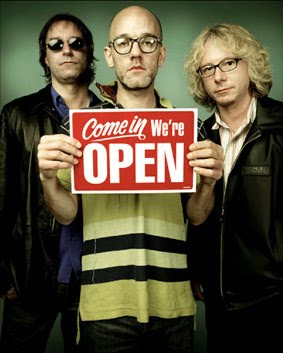 If you like rock music but said no to question 1 above, you might consider seeing Los Lobos tonight at Symphony Center.

Or if you said no to either question, find yourself a Sirius satellite radio and tune in to the "Jam On" channel this afternoon to catch Phish live from the third and final day of their Festival 8 in Indio, California.

Speaking of Phish, every Halloween night the touring veterans "go as" another rock band and play a classic album in its entirety live on stage. This year Phish let their fans choose the album they'd play, making it a fun guessing game by posting a list of dozens of albums on their website and gradually killing titles off the list in gory Halloween style as fans voted them down. Eventually it boiled down to a handful of finalists from which the band made its choice, unveiling the surprise live on stage last night when they tore into "Rocks Off," the opening song on the Rolling Stones' Exile on Main Street. I would have tuned in for that one but I was out seeing other bands cover yet other bands.

Back to R.E.M. If you did say yes to both questions above, you'll enjoy this.

From the promoter's press release:

Chicago fans of R.E.M. will get a Halloween treat a day late this year. On November 1st fans will get a one-night-only opportunity to see an advance screening of R.E.M.’s “un-concert” documentary film “This Is Not A Show – Live at the Olympia in Dublin” at the city’s newest music venue - Lincoln Hall, 2424 N. Lincoln Ave - absolutely free.

(Editor's note: Lincoln Hall, on the site of the old 3 Penny Cinema, is a new music room from the Schuba family, owners of the venerated rock club Schubas.)

In their acclaimed 2007 “working rehearsals” in Dublin, R.E.M. set up camp at the venerable Olympia Theatre in Ireland’s capital city and tested new material over five nights before passionate capacity crowds. Music at the show was produced by Dublin native Jacknife Lee who, along with R.E.M., co-produced Accelerate, the album that emerged from these shows.

“Live at the Olympia” gives fans an opportunity to hear those songs at their earliest stages of development. In addition to the new material, the band also served up several songs from across their nearly thirty year career - from Chronic Town to Accelerate and all stops in between!

For more information fans can contact Lincoln Hall at 773-525-2501 or visit www.lincolnhallchicago.com

Trailer and clips for the film may be viewed here: http://www.remdublin.com/media/videos

Tell them Ben Bass and Beyond sent you!
Posted by Ben at 7:00 AM

BB - I described the Phish thing to you as best I understood it, i.e. "killing off" classic rock albums down to 5 or so finalists. Ari did say that the band made the final decision on which record they'd be covering. I dunno, maybe if an actual *Phish fan* reads your blog, he or she can fill in any details, if they need filling in.

Could this be a set up for another comment from Ari B?? Anyway, I'm interested to hear about the Phish fest in the desert...

As a pesudo-phan myself-- enough to, say, be able to sing the Rift guitar solo from memory, but not enough to actually go to a multi-day concert-- I'm both happy with and slightly disappointed by Phish's cover choice. I think it's important for the newly reformed band to establish a little historic rock cred. Still, I can't help wondering what a more oddball choice, like Huey Lewis and the News's Sports ("if this is it, please let me know") would have sounded like. Oh well.