Who broke the Bank?

During my recent trip to the New Yorker Festival I heard some grumbling from habitués of the Cartoon Bank, the online repository and marketplace of New Yorker cartoons. They complained that it was recently overhauled for the worse, to the detriment of its customers, cartoonists and even ownership.
I visited the site to see what all the fuss was about and it turns out they're right. The site redesign did indeed work to its detriment and the Cartoon Bank is now a far cry from what it used to be.
For starters, the search functionality is less robust than it was before. It is no longer possible to search cartoons by popularity, which means a user looking for consensus wheat must sift through a lot of chaff.

The removal of popularity search also adversely affects the artists themselves, who get commissions on each sale. This is important. The vaunted New Yorker cartoonists, though beloved by millions, are in fact an endangered species; their many admirers rarely stop to consider their precarious position. There are fewer outlets than ever these days for gag cartoons (flipped through Punch or Judge lately? me neither) and the New Yorker jokesters have come to depend on secondary sales as an important source of income. The "greatest hits" search method was a crucial means of driving traffic to their best-loved New Yorker works, one they would like to see restored. Admittedly, there are three static "Best Sellers" shown on the right side of the Cartoon Bank page, but this is a pale imitation of a popularity search. Also, one of them is a New Yorker wristwatch.

Another fundamental problem: the Boolean search algorithm is out of whack. Searching "Sipress tennis" would not generate the "Sipress AND tennis" search result you might expect — i.e., any and all David Sipress cartoons about tennis — but rather, a "Sipress OR tennis" result of any cartoon either drawn by Sipress or about tennis.
Meanwhile, a search for "Alex Gregory cartoons" would produce not just a list of Alex Gregory's cartoons, but also cartoons in which a caption included the word Alex or Gregory. A Matt Diffee cartoon in which a Jeopardy! contestant says, "I'll take Presidential Haircuts for $200, Alex" might be funny, but it's hardly an Alex Gregory cartoon.
Upon the site's relaunch, in fact, it initially offered to display search results in a somewhat absurd A-Z or Z-A order, by the first letter of the caption. Why would anyone want dozens or hundreds of search results arranged arbitrarily in reverse-alphabetical order rather than in order of relevance or popularity? It makes no sense. The alphabetical arrangement has since been removed from the site, but more revisions remain necessary.
Check out this screen shot of search results for a standard request, business cartoons: 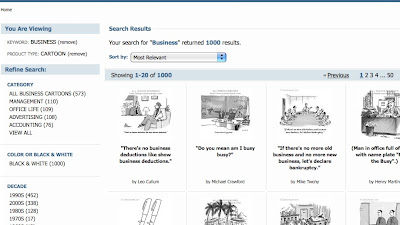 The results are ostensibly sorted by "most relevant," but that doesn't look like the case to me. One of the top eight results is set in a bar and another on a sandy beach. They just happen to use the word "busy" or "business."
On a lesser note, they also seem to have axed the Cartoon Channel, a popular feature in which a new cartoon would display every ten seconds or so in a slideshow format. It was cute and fun. Why get rid of it?

Then there's a final issue, one not immediately apparent to the casual observer: the search results are inaccurate! Despite The New Yorker's reputation for precision, the item count can be way off. Cartoonists who've drawn hundreds of dog cartoons are shown to have only a few dozen, despite the Cartoon Bank's ostensibly representing the entire New Yorker cartoon history. That might not sound like a big deal to you, but I hear it's driving the cartoonists crazy.
Here's hoping the powers that be restore the Cartoon Bank to its former glory.
Posted by Ben at 7:00 AM

Hey bitter Cubs fan, HOW ABOUT THEM YANKEES?

I'm not bitter at all. You, however, seem somewhat bitter that I called out Don Mattingly as unworthy of a spot in the Hall of Fame. Whatever, no hard feelings. Thanks for coming by.