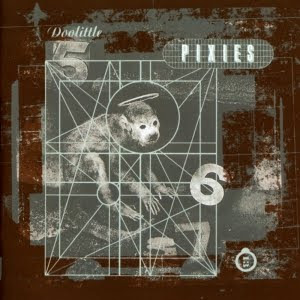 A rock band without peer, underappreciated in their time, the Pixies have steadily grown in renown and acclaim since their acrimonious breakup in the early 1990s. Their 2004 reunion tour was a hero's return, a hugely successful series of live dates that triumphantly and resoundingly confirmed their status as one of the top rock acts of the past quarter-century.
Five years later the Pixies are back on the road, this time celebrating the twentieth anniversary of their landmark 1989 LP Doolittle. They're playing that record in its entirety on this tour along with its related B-sides including "Bailey's Walk," "Dancing the Manta Ray" and "Weird at My School."
The Pixies' Doolittle tour hits Chicago for three shows this weekend at the Aragon Ballroom (does anyone still call it the Armageddon Brawlroom?).
My Flavorpill preview is here.
Posted by Ben at 9:00 PM

Since the Lord of the Rings movies, I think of it as the Aragorn.

A rock band without peer? Caught up in a bit of hyperbole, aren't you?

Considerably less of an overstatement than whatever it was you said about Don Mattingly.