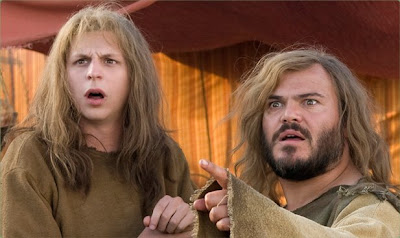 After pretty much conquering the Hollywood comedy scene over the past thirty years, Harold Ramis didn't want to raise his family in Los Angeles, so they moved back to Chicago. He set up shop on the North Shore, where he continues to work on film projects while staking a reasonable claim to the title of coolest suburban parent ever.
I've had the pleasure of crossing Mr. Ramis' path around town on a number of occasions, an Israel Film Festival here, a Second City reunion show there, and always enjoyed him a lot. His wry, brainy delivery in the film world is no accident because that's who he is, a sardonic wiseacre with a lot of heart. He's not only a huge comedic talent but an engaging guy you can't help but like.

At a recent appearance at a local high school's biannual celebration of the arts, Ramis screened the funny opening scene of his new prehistoric comedy Year One, then gave an interactive talk about how he goes about creating a film comedy: the overall point he wants to make, the tone he tries to strike, the actors he might prefer to use for different types of roles, and how to make the whole thing saleable to a movie studio. Kids of all ages were hanging on every word.

Harold Ramis will receive a lifetime achievement award at tonight's special preview screening of Year One at the Music Box Theatre to kick off the weeklong Just For Laughs Chicago comedy festival. My Flavorpill preview is here.
Posted by Ben at 7:00 AM