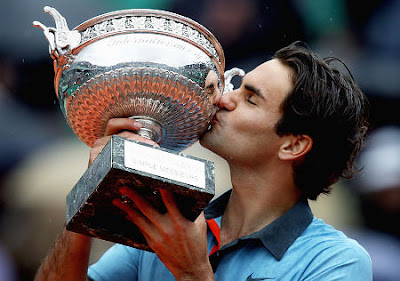 Roger Federer got the job done yesterday, winning his first French Open to become just the sixth man to complete the career Grand Slam. Federer received the Coupe des Mousquetaires trophy from the fifth member of that exclusive club, Andre Agassi. The triumphant yet humble champion graciously addressed an appreciative crowd in fluent English and French. A true world citizen, he speaks five languages and exudes class in all of them.
To some, Federer's victory was diminished because he didn't have to beat four-time defending champion Rafael Nadal en route to his first Roland Garros title. Not to me. Nadal was in the tournament but failed to make it to the final. That's not Federer's fault. He showed up for and won his every match, including a decisive win in the finals over the player who'd beaten Nadal. What more could you ask?
Also, as Federer pointed out in his post-match interview with John McEnroe, he beat Nadal on a clay court a few weeks ago in Madrid. It's not as if he can't play with the guy, even on Nadal's best surface. About the only thing Federer hasn't done is to beat Nadal on a clay court, best three sets out of five. Not having to face the Spaniard en route to the Paris title doesn't diminish the accomplishment one iota.
What a difference a year makes. In last year's French final, Federer managed to win just four games as Nadal gave him a free lesson, or more to the point, a ringing reminder that Roland Garros was Nadal's house. The Spaniard had won the French Open all four times he'd entered. Federer, meanwhile, had lost to Nadal in all four of those years, including in the past three finals.

A month after dismantling Federer at the 2008 French Open, Nadal added insult to injury by snapping Federer's five-year title streak at Wimbledon in an exquisite final. With Federer also having failed to defend his Australian Open title in January (when, to be fair, he had pneumonia), naysayers started questioning whether Federer would ever win another major.

I felt more or less the same way toward these folks as I did in 2002 toward those who bought the president's weak case during the runup to the Iraq war: they were so obviously wrong, but it was pointless to debate them. I insisted to the doubters that Federer still had plenty left in the tank, and that even a Federer who looked about 80% of his insanely great personal best was still good enough to win more major titles.

In the case of the war, it gave me little satisfaction when later events bore out my skepticism. In this case, I'm happy -- not so much that I was right, but happy for Federer. I can't imagine a classier, more deserving champion. Sportsmanlike, generous, and immensely likeable, he's a wonderful ambassador for the sport, for sports in general, for the human race. As for his day job, he does things on a tennis court that no one's ever done. It's a joy and a privilege to watch him play.

Just as Pete Sampras earned sweet vindication by winning the 2002 U.S. Open after over a year of having to endure misguided people telling him to retire, that he shouldn't finish his career the way he wanted to, I'm glad that Federer silenced his silly critics by winning the 2008 U.S. Open, reaching the finals of the Australian Open in January, and now taking his first French Open. Speaking of Sampras, Federer also tied him yesterday with a record 14 men's Grand Slam titles.

The plot thickened today as Nadal pulled out of the Queen's tournament, the most prominent grass-court Wimbledon warmup event. Word out of his camp is that he has a knee problem unrelated to the tendinitis he's been suffering for the past few years. It's not clear whether he'll be able to defend his Wimbledon title.

If Nadal can't play at the All England Club, Federer has to be the huge favorite to start another Wimbledon winning streak. I will be fortunate to attend that tournament this year and I can't imagine a more satisfying experience than to cheer for the great Roger Federer as he continues to make history. He is the very model of a modern major champion.
Posted by Ben at 8:00 PM