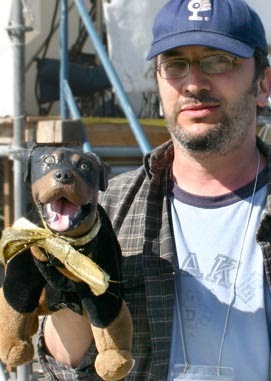 Princess Diana at the Field Museum? Please. Queen Elizabeth in Grant Park? Whatever. Robert Smigel is in town and comedy connoisseurs are rejoicing. Smigel lives at the intersection of smart, funny, dirty, original and outrageous, and nobody does it better.
Casual fans know his Ambiguously Gay Duo and Triumph the Insult Comic Dog. Those with longer memories remember him as Late Night with Conan O'Brien's first head writer and the creative genius behind The Dana Carvey Show. Hardcore fans like myself loved his Comedy Central puppet show, TV Funhouse. But perhaps only his wife knew that he shot a late-nineties pilot for Fox television, a gonzo parody of Bozo's Circus that played less as parody than straight-up homage.

Smigel's here with longtime co-writer Dino Stamatapoulos for the Just For Laughs comedy festival, screening their never-aired Bozo pilot and other old gems, taking audience questions and performing some new material. They're doing two shows; I caught the first one this evening and it was a home run.

The Bozo pilot was fresh and funny throughout (check out Dave Hoekstra's nifty Sun-Times piece on the pilot here) even though one of its best bits was left on the cutting-room floor: a young, unknown Northwestern theater alum named Stephen Colbert as Grimy the Outhouse. It screened after the pilot to more big laughs.

What else did I learn? Much like the Bozo pilot might be deemed an even more obscure version of TV Funhouse, so did Smigel also once devise an even lesser-known Adam West vehicle than Lookwell, the celebrated pilot he and Conan O'Brien actually made starring West as an out-of-touch former actor.

Smigel's other dream West project, one he couldn't persuade a network to fund, was a show starring Adam West as a retired Adam West, but with the sensibilities of his old Batman show. When his agent calls with an offer for a commercial voiceover, West intones, Batman-style, "It's too... perfect." Then, after his fax machine jams up as the offer arrives, West clenches his fist and cries, "George Kennedy!" Cut to a gleeful George Kennedy, fax machine saboteur, shot diagonally like a Batman villain. Who wouldn't watch that show?
Smigel explained that his now-famous puppeteering was inspired by Edgar Bergen, whom he called "the biggest ventriloquist in the 1930s and '40s," and Stamatopoulos called "the only one." Bergen apparently used to perch a young Candace Bergen on one knee and Charlie McCarthy on the other and make them talk to each other. How old was his daughter at the time? "Young enough to be fucked up by it."

As for new bits, Triumph and Smigel just flew into Chicago from the Bonnaroo music festival, where they shot footage for The Tonight Show with Conan O'Brien and performed with Bruce Springsteen. They also made the rounds, ridiculing every musician in sight. "So many white rappers these days. The Beastie Boys... Will Smith." And: "Flavor Flav wears a clock around his neck so he knows how far back he's setting the civil rights movement."

Throughout the evening, Triumph had been lying forlornly under Smigel's chair in a purple nylon duffel bag. But after Smigel screened and discussed the more notorious Saturday TV Funhouse cartoons he'd made for Saturday Night Live, including "Conspiracy Theory Rock" and "Michael Jackson 2," Triumph sprang to life, commandeering a makeshift puppet-show proscenium reminiscent of his early Conan days to close the show.

The canine Rickles wasted little time eviscerating everything in sight. Looking around the Lakeshore Theater, a beloved Chicago comedy venue, Triumph sneered, "Look at this place. I haven't seen a shithole this big since Kirstie Alley bent over to pick up a pie." And: "If these walls could talk. There's been more comedians in here than in Sarah Silverman."

It still burns Smigel that Comedy Central renewed Mind of Mencia rather than TV Funhouse. Or so you might have gathered from Triumph's Carlos Mencia-themed faux Wikipedia page, which informed us that Mencia is a "vagina-flavored comedian" who stars in a Comedy Central TV show called What If Dave Chappelle Was Retarded.

Triumph also treated us to the collected Twitter tweets of Oprah Winfrey, who's making everyone read the complete William Shatner TekWar space novel series, not to mention sleeping with everyone's wife, just because she can; John Mayer ("Woke up, had breakfast, went out and sucked for the rest of the day"); George Clooney's penis, which philosophically wonders whether it will be in Darfur today or somewhere less virtuous; and Lindsay Lohan ("Mmmgggllllzzzzhhh"; as Triumph explained, she's limited to 140 characters).

Robert Smigel and Dino Stamatopoulos appear again tomorrow evening at 8:30 at the Lakeshore Theater. My Flavorpill preview is here.
Posted by Ben at 11:00 PM

Awesome stuff. Wish I could have seen it.