It's been a week of fun around Chicago, and not just because the last digit on the calendar changed.
First on Friday night you had your Bing Faithful's Very Merry Nondenominational Holiday Special at the Annoyance Theater, intelligent Christmas goofiness with tongue firmly in cheek.
There was also traditional yuletide entertainment onstage all weekend, from Americana comfort food (Meet Me in St. Louis at the Drury Lane Water Tower) to Irish bleakness (Dublin Carol at Steppenwolf).
Fancy-pants theater is fine, but like the kid in the old Twisted Sister video, some people just want to rock. Happily for them, they didn't have to choose between the big Alex Chilton birthday party Sunday night at the Empty Bottle and the return of The Sea and Cake, Tuesday and Wednesday at Schubas.
Tuesday also brought the Eve of the Eve, an annual charity ball at downtown Union Station and the week's biggest drunkfest until the next night. I was getting whiskey-soaked text messages from friends all evening and I wasn't even there. Didn't write that one up for Flavorpill but with two thousand people a year in attendance, I don't think they need my help spreading the word.
Although I persist in the delusion that the world plans its social calendar around my Flavorpill writeups, not even I am so silly as to think anyone was looking for my advice for New Year's Eve.
I did, however, write up the ginormous event of New Year's Day, the NHL Winter Classic at Wrigley Field. The Winter Classic is a remarkable new tradition in the National Hockey League, an annual contest played outdoors. The open-air set-to is a nostalgic reminder of the pickup hockey games on frozen ponds and rivers where many current pros started playing the sport as kids.

It's captured the imagination of a lot of people, including casual observers like myself who know little about hockey. Tickets sold out in twenty minutes long before I even cranked out my preview, but we cover sports so rarely in Flavorpill, it was fun to write and I wanted to mark the unique occasion of ice hockey being played outdoors at the old ballyard. 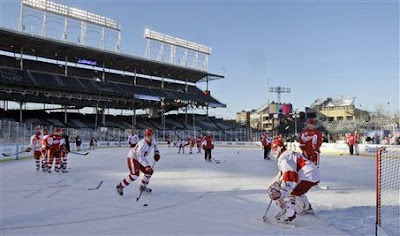 It was fascinating to follow news reports of the gradual construction of a temporary pro-quality ice rink at Wrigley Field, but even as a matter of pure hockey, there were subplots aplenty.

After years of slumping attendance and indifferent teams, the resurgent Chicago Blackhawks have quickly restored their luster. Led by 20-year-old captain Jonathan Toews, the third-youngest team captain in league history, and fellow 20-year-old whiz kid Patrick Kane, the Hawks tore through Canada and the U.S. on their latest road trip, beating everyone in their path on a 9-game winning streak.

The run was broken up by their personal Voldemorts, the Detroit Red Wings, defending NHL champions, winners of four Stanley Cups in the last eleven years and the league's consensus best team. On the other end of the age spectrum, the Wings' lineup includes Chris Chelios, the former Blackhawk All-Star and league Methuselah at 46 years old. As good as the Blackhawks look against the rest of the league, the Wings look against Chicago, having already beaten the Hawks four times this year.

The Winter Classic was the back half of a home-and-home series, the first part of which Detroit won at Joe Louis Arena on Tuesday. Beyond the bragging rights, there were two more points at stake in Chicago and a few scores to settle from two days earlier (one player was checked so hard he did a full-body 180 over the boards). Unfortunately, despite taking an early lead, the Hawks couldn't close the deal as Detroit poured on five unanswered goals to take the signature game.

Astute as ever, Bob Costas observed on NBC's national telecast that the Hawks' rise is reminiscent of that of Michael Jordan's Bulls, who only tasted glory after figuring out how to get past a tough league champion from Detroit in their same division.

As a frustrated Andy Roddick once said about constantly losing to Roger Federer at Wimbledon, "It's not a rivalry until I win one." Although the Wings remain the better team, the Hawks keep getting closer, playing Detroit tough and showing no fear. On a broader note, with the Hawks and Wings two of the original six franchises in the NHL, a renewal of their rivalry isn't just the latest chapter in a storied history, it's good for the league.

OK, we've covered comedy, theater, music and sports. What's left? A trip to the movies. Rounding out our week of fun is some silver screen gold. As Winston Churchill said, "I am easily satisfied with the very best," and The Sting is probably my favorite movie of all time because that's exactly what it is. If you've never seen it, do yourself a favor and get over to the Music Box Theater today or tomorrow for a matinee screening. If you aren't thoroughly satisfied, I will personally refund your money.

p.s. What kind of pretentious ass gratuitously entitles a blog post in French? Ce genre, mes amis.
Posted by Ben at 9:50 AM

The run was broken up by their personal Voldemorts, the Detroit Red Wings, defending NHL champions,

What are Voldemorts? I had to look this word up, does it deal with Harry Potter? As far as I know most die hard hockey fans are not going to get that reference, unless most of your readers are in Junior High school. LOL
Really the Blackhawks are doing things right since the old dinosaur owner has passed on.