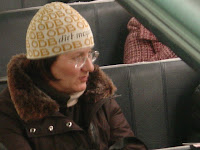 Every morning when I arrive at my commuter train platform, I find a mystery in the form of a fiftysomething lady, tired-looking, eastern European-sounding, a completely unremarkable wage-earning immigrant except for her knit hat repeatedly emblazoned with "ODB."

Even hip-hop illiterates such as myself know this is shorthand for Ol' Dirty Bastard, aka the late rapper and Wu Tang Clan co-founder Russell Jones, who also performed under the names Big Baby Jesus, Dirt Dog and Dirt McGirt when not fathering thirteen children, suing the NYPD, releasing hit records, or being incarcerated. Helpfully, lest there be any confusion, the hat also bears the legend "dirt mcgirt" (see photo).

Questions to ponder: has this lady ever heard of Ol' Dirty Bastard? Is she also into Method Man? Does she know that she is the most awesome person on the train?
Posted by Ben at 7:32 AM

It's Helga! She is awesome! - Ahnie

Don't hate, Dawg! You just jealous 'cause she be cooler than you.

Why don't you just ask her? Brooke

thank you for posting this. i can now share it with all my friends with the same enthusiasm. benbassandbeyond, you rock.