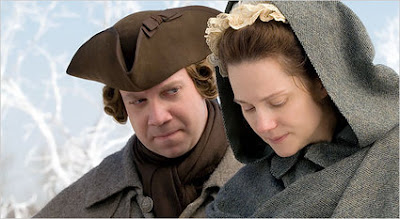 Just watched the first two episodes of the new HBO miniseries John Adams, based on David McCullough's bestselling book. Like Ray Coleman's Lennon, it tells the tale of a riveting era as seen through the prism of a key figure, bringing to life the founding of America in a way that a history textbook can't.

And like From the Earth to the Moon and Band of Brothers, the fellow Tom Hanks-produced HBO history lessons that preceded it, John Adams is a pious, earnest effort. With a keen eye for detail it painstakingly recreates a world, humanizing people that have been deified elsewhere and presenting events not as history but story. Laura Linney shines as the proto-feminist Abigail Adams and Tom Wilkinson charms as Benjamin Franklin.

Don't worry if, like me, you missed the first two installments when they debuted last weekend. HBO is still running them on its various channels and the HBO On Demand service. The seven-part series continues for the next month on Sunday evenings.

I read Alessandra Stanley's New York Times review of John Adams last weekend while I sat waiting for my tennis court to open up. She generally liked it but criticized the casting of Paul Giamatti in the lead role, finding his acting range too limited to encompass the great man. She felt that his screen presence paled before, for example, that of Anthony Daniels in the Adams role in 1776.

Me, I thought Giamatti was just fine. It's unclear how a contemporary reviewer can profess to gauge the accuracy of an actor's portrayal of a man who died on July 4, 1826. Her review was otherwise perceptive, so I'll stop short of suggesting that Alessandra Stanley has been miscast in the role of New York Times television critic.
Posted by Ben at 9:15 PM

It was William Daniels who portrayed John Adams in both the stage and screen versions of "1776". Yes, Daniels was excellent in the role. But I also feel that Paul Giamatti - in his own way - has so for portrayed a memorable Adams.

I really cannot understand Ms. Stanley's view that Giamatti paled in comparison to Daniels. I think she is simply being prejudiced or cannot imagine any other actor - aside from Daniels - portraying Adams. How sad.

Whoops, you're right. I got the two generically named actors confused. From this I draw two conclusions:

(i) I am no more qualified than Alessandra Stanley to write television criticism; then again, the mighty NYT copy-editing staff has her back, so it's not apples to apples (do blogs have interns?); and

(ii) I apparently have a subconscious desire to see John Adams portrayed in a C3PO style. "Look, sir, it's British military commander Thomas Gage. And he's holding a thermal detonator!"

I've enjoyed Giamatti's performance as well, although at times his proto-American/English accent sometimes slips into gravely/incomprehensible. He did the same thing in Shoot 'Em Up.

Thanks for writing this.