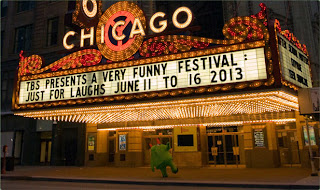 If it's the second week of June, it's time once again for Chicago's most adored new tradition this side of Stanley Cup hockey, "the Bean," and the downtown water taxi:  the Just For Laughs Chicago comedy festival. The cavalcade of hilarity plays tomorrow through Sunday at venues around the city.

Since 2009, when the Montreal-based Just For Laughs comic empire teamed with the "very funny"-rebranded TBS cable network to present live comedy festivals in several American cities, JFL Chicago has quickly grown into the largest annual comedy festival in the United States, and easily one of the best.

Conveniently, most of this year's club shows will play in the newly renovated Stage 773, a four-theater complex on Belmont Avenue in Lakeview.  Four stages under one roof mean shorter commute times for populace, performers, producers and press alike.

Another can't-miss is Karl Walzein (@dadboner), the fictitious tweeter whose Michigan working-class bravado, "finger guns" and love for "cold ones, you guys" has amassed 143,000 Twitter followers.  Creator Mike Burns will have solid shtick up his blue-collar sleeve at Stage 773 on Wednesday and Thursday.

I'll once again be covering the festival this year so watch this space (plus Facebook and Twitter) for updates.  The full festival lineup is available at justforlaughschicago.com.

It's the funniest week of the year. Get out there and catch something (ideally a show)!
Posted by Ben at 7:00 AM

Excellent post. This is not only funny but informative. You put huge related information. Thanks for sharing.
온라인카지노 안전놀이터

Thank you for all of your work on this web page.
เกมเสือมังกร