Looking for some fun this weekend around the city? I've previewed a handful of the best shows in town for Flavorpill Chicago. (Not in Chicago? Get on a plane!)  The first two close on Sunday, so don't wait around. 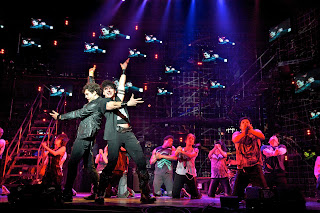 American Idiot
Broadway In Chicago
Ford Center for the Performing Arts, Oriental Theatre
through Sunday
“American Idiot is the latest in a hard-rocking string of hit Broadway musicals. But while Rent and Spring Awakening boast trendy 19th Century literary pedigrees, they can only envy its secret weapon: Billie Joe Armstrong. The poet laureate of the 1990s pop-punk explosion brings more hooks than Kevin Van Dam, and his catchy songwriting translates well to the theatrical idiom. This portrait of three struggling nihilists from the suburbs is somewhat thinly drawn, but the familiar score from Green Day's chart-topping American Idiot and 21st Century Breakdown LPs provides vivid color.”


“This entertaining piece of historical fiction posits a secret 1947 summit meeting in which Brooklyn Dodgers general manager Branch Rickey seeks the blessings of Paul Robeson, Joe Louis, and Bill "Bojangles" Robinson before calling up Jackie Robinson to play in the major leagues and thereby break their color barrier. To its credit, Ed Schmidt's lively script is more nuanced than the antiracist sermon he might have delivered, exploring the conflict even among those with the shared goal of an integrated America. It's a spiritual companion to Jonathan Eig's Opening Day, the bestselling chronicle of Robinson's first big-league season that, although published after this play was written, nonetheless informed Lookingglass Theatre's current production.”

The Foreigner
Provision Theater
through March 18


“Before his tragic death in a plane crash at age 39, playwright Larry Shue penned two hilarious farces that have grown into American classics, The Nerd and The Foreigner. In the latter, a painfully shy British traveler is mistaken for a visitor from an exotic faraway land during his weekend stay at a backwoods Georgia fishing lodge. Since he's presumed to speak no English, he overhears the secrets of the local cast of characters and finds his own inner extrovert as he sets out to right some wrongs. Provision Theater Company's winning production serves up Shue's life-affirming crowd pleaser with a sure hand and a light touch.”

Motion
Signal Ensemble Theatre
through March 3
“In the finest Law & Order tradition, Ronan Marra's Motion draws inspiration from recent sports headlines. A hotshot NFL agent named Drew (read: Drew Rosenhaus) struggles to help his star client remain the projected top NFL draft pick after the blue-chip quarterback prospect runs afoul of the law, while a labor dispute threatens to shut down the entire league. It all rings familiar, yet to its credit the Signal Ensemble Theatre throws it downfield in this snappy new drama. Adding verisimilitude: Glenn Stanton, who plays a college football defensive back, also did so in real life, and Tim Martin, as the wayward QB, looks a great deal like one Jay Cutler.” 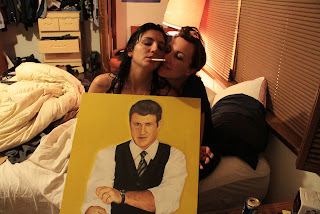 The Mary Kay Letourneau Players Present...
at IO Theatre
Sundays 10:30pm through March 11
“As you might infer from their choice of infamous eponym, the Mary Kay Letourneau Players are not particularly concerned about offending people; if anything, they'd be disappointed if they didn't. With in-your-face material exploring such cultural sideshows as monkey attacks and HIV-positive puppets, Second City veterans Katie Rich and Kate Duffy grab the audience's lapels with four hands and shake vigorously. It's a risky path they travel, but with a heady mix of clever jokes, uncomfortable moments, and zaniness for its own sake, their knowing late-night crowd gets what it came for.”
Posted by Ben at 8:00 PM