The new LearnedLeague trivia season is underway. Here's how it started.

1. Of the 46 women who have held the position of First Lady of the United States, how many of them are still living?

OK, you’ve got Marie Antoinette, i.e. the Mrs. Bush who said Hurricane Katrina refugees being housed in the Superdome were “underprivileged anyway, so this is working very well for them” and didn’t want to waste her “beautiful mind” thinking about “body bags and deaths” in a war her son provoked; the Mrs. Bush who killed a guy when she drove through a stop sign; Michelle Obama; Hillary Clinton; Nancy Reagan; Rosalynn Carter. Anyone else?

I knew Lady Bird Johnson had lived to a very old age because I once heard Bill Clinton speak at a dinner where I was seated at a table of mostly Secret Service agents. This was shortly after 9/11 but Clinton still enjoyed federal protection, and our dinner conversation touched on the theme of shielding former Presidents and their families. Some of the agents present had been assigned to guard Mrs. Johnson into her 80s or 90s before she passed away. In her final years she was confined to a bed on the family’s enormous Texas ranch, hardly a target for anyone. The agents chucklingly referred to that waste of taxpayer money as the “Weekend at Bernie’s detail,” and explained that it was examples like this that eventually shortened the Secret Service protection of the families of former presidents. By the way, Clinton spoke about terrorism, Al Qaeda, etc. for over an hour without notes. He knew the subject cold and held 2800 people in rapt attention, many of whom surely shared my regret that he was now a mere ex-president.

So I knew Lady Bird Johnson was gone. Same with Jackie Kennedy, whose May 1994 death was a major news story, but one I remember extra clearly because I happened to walk through a pack of news reporters on the sidewalk outside her apartment building at around 80th and Fifth Avenue as she lay on her deathbed upstairs. I was headed to the Metropolitan Museum of Art across the street. I also knew Betty Ford had died in the last few years.

This question, then, for me at least, boiled down to a referendum on the issue of whether Pat Nixon is still alive. I wasn’t 100 percent sure but felt like she was already gone when her husband died, and even if not, I felt like it was fairly unlikely she was still around. So I guessed six and I was correct.

2. The character from Shakespeare (and from earlier English folklore) named Robin Goodfellow is nowadays better known as what?

Total gimme for this English lit major. Puck from A Midsummer Night’s Dream.

3. In 1862, an American company named Chase & Sanborn became the first to pack and ship a now common form of what food commodity?

The only things I know about Chase or Sanborn didn’t help. I know Salmon P. Chase was a Chief Justice of the United States. I once read The Wolves of Willoughby Chase. I know Sanborn Western Camp is or at least was an overnight camp based in Florissant, Colorado. And I know David Sanborn used to play sax every Friday night on NBC’s Late Night with David Letterman. I think the Letterman show used to air new episodes Monday through Thursday, with Friday Night Videos in that time slot on Friday. Then Dave was given all five nights, with a rerun Mondays and new shows Tuesday thru Friday, with Sanborn on Fridays, and Friday Night Videos was I believe pushed back an hour before it was eventually canceled. Wait, there’s a trivia game going on?

No clue on this question. I considered guessing either sugar or table salt before I eventually guessed ground beef (the worst of these three guesses, so poor strategy). The correct answer was coffee.

4. Tahoma is the name of a computer font developed in 1994 for Microsoft Windows, and also an original Native American name for what mountain?

To me, Tahoma said Tacoma, as in Washington State. It was easily plausible that these were variations on the same Native American word. Not having anything else to go on, I just went with the best-known mountain in the Sea-Tac area, Mount Rainier (which I think is in the Cascades, maybe?). Its name was strongly reinforced in my mind at the 2010 National Puzzlers’ League convention in Seattle, where a number of people independently wrote puzzles involving wordplay on how Seattle and Washington were “Rainier” than other places. Mount Rainier proved to be the correct answer. Other people later pointed out the local Microsoft angle to this question that I’d overlooked. 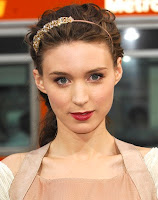 5. Identify the actress in this photograph.

Whenever LearnedLeague asks about a recently famous celebrity, I seem to drop the ball. In my rookie campaign last season, I mistook Danica Patrick for an actress since she wasn’t wearing a racing jumpsuit in the given photo. I also guessed Lady Gaga as the singer of an audio snippet of Adele’s “Someone Like You” even though I knew Adele was on to the next single after “Rolling In the Deep.” I'd even heard of it. I just hadn’t heard it enough yet.

I didn’t know who this person was so I guessed Zooey Deschanel with little confidence. Maybe if I’d thought about the Oscar nominations, or if the photo had shown jet-black bangs, ghostly white skin and piercings, I would have known it was Rooney Mara.

6. While most steel is manufactured using carbon as the alloying material, stainless steel is formed by alloying iron with what other element (at a minumum 11% content by mass)?

I wasn’t sure but I felt like the answer was chromium. I took AP Chem in high school so maybe I remembered it from there. It made sense since chrome is generally shiny and doesn’t rust as far as I know. And I felt like if it was the only other silvery element I could think of, silver, I would have known that. (I now realize mercury is silver-colored too, but I didn't think of it, and even if I had, it's toxic so it's probably not the answer.) Lacking a better guess, I guessed chromium and it was correct.
Posted by Ben at 12:00 PM

Interesting you put down "ground beef." I also put beef, a guess. In what will surely become a LL tradition for me, I did think of coffee just before putting down beef.... Oh well, it's not like I knew it, so I can't be too disappointed that I didn't suss out the right guess.

Beyond what you know, or can deduce or pull out of thin air, the outcome pretty much rests on those two variables: whom you play against when (i.e. how good your opponent happens to be against you on a given set of questions) and how you play defense.

For that matter, the sample sizes are so small, with just six Qs a day and 25 matches a season, that the little things are often determinative. Over the course of a season, at least the full one I've played so far, the vagaries balance out and there ends up being little difference among similar players. With 2 or 3 days left in my rookie season, there were literally like 12 players fighting for the last handful of spots in the current C division. A question here or there, not just in those matches but over the previous month, could easily (and presumably did) make a difference. I certainly blew several wins or ties during the course of the season with boneheaded mistakes, but consoled myself with the knowledge that others presumably were doing the same thing.

There's also the variable of how tough your slate of opponents is, more relevant to me last season when we had over 40 players in my rundle so I didn't even play some of them all season. Some people creamed the weaker players while others answered a lot of questions correctly but still had their hands full against rock star opposition.

And then out of nowhere, a strong player will forfeit a match to whoever you're fighting for position against, and you're like, Pujols, NOW you twist an ankle?

Too bad you can't Phone a Friend-- I knew Pat Nixon was dead (predeceasing Richard, who was devastated by her loss) AND Chase & Sanborn was an instant gimme; but perhaps it's out of business now? Still, you did so well! This is certainly not a game for the likes of me, despite my vast store of idiotic trivia. (I am wasting no end of brain cells storing stuff like my father's service serial number--something Army kids were encouraged to know when we were Army of Occupation dependents. But I can't remember what I made for dinner...)