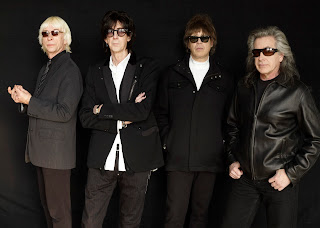 After a long break, the Cars have recorded a well-reviewed new album and they're going back on the, uh, road.

The tour will include a May 18 date at the Riviera Theatre in Chicago. Tickets go on sale this Saturday at 10 a.m.

More on the album and tour in the Cars' press release after the jump.

FOR IMMEDIATE RELEASE
MONDAY, April 4, 2011
THE CARS
Announce live dates including May 18th at the Riviera Theatre!
New Album Move Like This Available May 10th From Hear Music/Concord Music Group
Monday, April 4th, 2011 - The Cars have announced an initial string of concerts across North America, including a stop in Chicago on May 18th at the Riviera Theatre.  The set list will draw from the band’s remarkable career and include songs from their eagerly awaited new album Move Like This, set for release by Hear Music/Concord Music Group on May 10th, 2011.
Move Like This, produced by Garret “Jacknife” Lee and The Cars, finds the band—Ric Ocasek, Greg Hawkes, Elliot Easton and David Robinson—brimming with confidence and creative energy, in full charge of their considerable power and enduring influential artistry. Previewing the new album and debut single, “Sad Song,” Rolling Stone affirms, “It’s as if they never left." The magazine calls Move Like This “a total recall of the precise swagger, art-rock minimalism and chrome-gleam pop” that defines The Cars.
The project’s genesis came in the fall of 2009 as Ocasek considered how to proceed with his latest batch of songs. He realized that his best option was the three players with whom he had the most symbiotic relationship. Ocasek reached out to Hawkes, Easton, and Robinson, each of who were excited at the opportunity to play together again. “It totally clicked immediately,” Ocasek says.  “Everybody got right into it as if we had never stopped playing. After two days I thought, ‘Oh yeah, this is going to be cool.’”
Even as the band fell naturally back into rhythm, Hawkes says, “We tried hard to keep it from just being a nostalgia thing. We definitely wanted to bring a modern slant to it.”
“The Cars have always had a futuristic sound,” added producer Jacknife Lee (U2, R.E.M., The Hives, Weezer), “and this is something we wanted to keep – tight, taut and lean. There’s a freshness and clarity to The Cars and Move Like This that most new bands don’t have.  That’s pretty special.”
Easton said, “The years melted away and within minutes, we were up to our usual mischief.  We had a blast making the record and I think that shows in the music.”
Looking forward to the upcoming live performances, Robinson said, “We have such a great catalog of songs to choose from. The new songs should blend in nicely.”
Tickets for the May 18th show at the Riviera Theatre, 4746 N. Racine, are $49.50 and go on sale this Saturday, April 9th at 10:00am through etix.com and jamusa.com.  Showtime is 8:00pm, ages 18 & Over.
To hear songs, play videos and get news on The Cars, please visit:
www.facebook.com/thecars
www.thecars.org
Posted by Ben at 6:00 AM