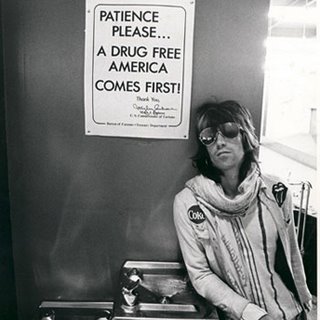 As you've probably heard, indestructible Rolling Stones guitarist Keith Richards has penned an autobiography in which he somewhat incredibly claims to remember the last forty years.  Keith's book has been widely hailed as a gimlet-eyed recollection of a remarkable ride, though apparently he gathered few stories about Jerry Moss.

By coincidence, another celebration of the Stones resumes here in Chicago as the Signal Ensemble Theatre brings back Aftermath, its musical biography of founding guitarist Brian Jones. The play drew raves and national attention during its short, incendiary run at the Raven Theater in Rogers Park last spring. Unfortunately, key cast members had other commitments that prevented its extension.

Signal has since opened its own theater space in the North Center neighborhood, where they've just reassembled the original cast for another run. I caught the opening the first time around and found it punchy and entertaining. (To my surprise, the show was stolen by a guy playing George Harrison.)

My Flavorpill preview of Aftermath is here.
Posted by Ben at 9:00 AM