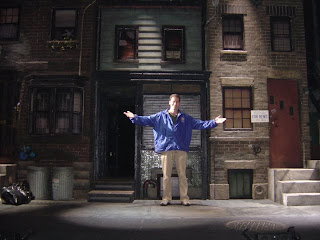 Avenue Q is a outer-borough New York neighborhood where recent college grads try to find an apartment, get a job, enter the dating scene, enjoy the big city, and learn their purpose in life.

Much like other New York City institutions — 42nd Street, Fiorello LaGuardia, the Plaza Hotel — someone eventually wrote a play about Avenue Q.  I stopped by for a visit shortly after it opened on Broadway at the John Golden Theater (see above).

Buoyed by a rare combination of critical adulation and hipster buzz, the show played for six years on the Great White Way and became one of the 25 longest-running Broadway musicals of all time.  It's now on the road, where its weeklong Chicago run opens tonight.

My Flavorpill preview is here.
Posted by Ben at 6:00 AM