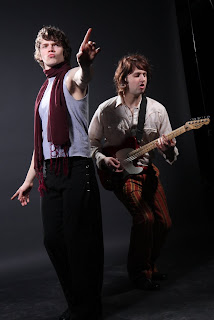 It's a jukebox biography in the tradition of The Buddy Holly Story, a less slick Jersey Boys, a longer-arcing Million Dollar Quartet, but there are fewer songs than in those shows.  This one clocks in at a brisk 90 minutes, much of which documents the gradual estrangement of the spiraling Jones from his bandmates and girlfriend.

Aaron Snook is credible as the doomed rocker, and Nick Vidal channels a slithery young Mick Jagger, but oddly enough in a play about the Stones, Andrew Yearick steals the show as George Harrison.  He's a friend who teaches Brian to play the sitar; after a short lesson in instrumentation and eastern mysticism, they play "Norwegian Wood."

My Flavorpill preview is here.
Posted by Ben at 6:00 AM