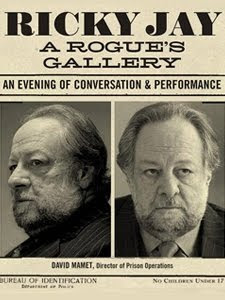 The illusionist Ricky Jay is deeply connected to the unknowable mysteries of the universe. One of these, David Mamet, has featured Jay's sleight-of-hand expertise on the silver screen and directed his two previous touring stage shows, Ricky Jay & His 52 Assistants and Ricky Jay: On the Stem.

Jay's back on the road with A Rogue's Gallery, his third Mamet-helmed evening of chitchat and prestidigitation. This time he's bringing a stageful of magical posters and artifacts with him, taking questions about them from the crowd and performing illusions based on the conversation. So the audience chooses its own adventure.

A Rogue's Gallery opens tonight at the Royal George Theatre and plays Chicago all week. My Flavorpill preview is here.
Posted by Ben at 8:00 AM