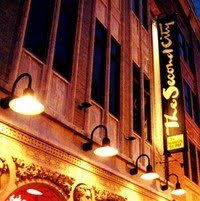 Missed Second City's big 50th anniversary weekend celebration? Same here, but they've got one more big special show in store, and maybe the best one of all.

The benefit helps fund the effort, as do Second City's comedy and rock-star friends who perform during the 24-hour run. Now all they need is you to come out and complete the circle by catching some indie heroes (The Mountain Goats, Will Oldham) and improv grandees (Matt Walsh, Horatio Sanz) playing in a small room.

The Second City That Never Sleeps: Letters to Santa kicks off at 6pm tomorrow and runs for the next 24 hours. Jeff Tweedy takes the stage at 7pm. Tickets are $15, available at the door and good for the entire 24 hours. More information in my Flavorpill preview here.
Posted by Ben at 8:00 AM