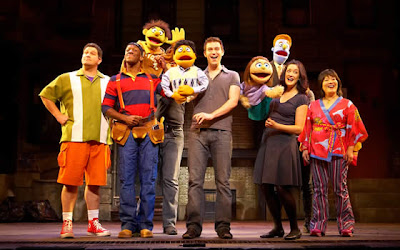 It's a big loss for the Great White Way. Six years after opening on Broadway, Avenue Q remains a completely entertaining, surprisingly moving ride that sends contented crowds smiling into the New York night. It's become one of the 25 longest-running Broadway musicals of all time, a beloved pillar of the American theater scene that will leave a major void in its wake.

Regular readers of this space will recall that one of the show's co-creators, the talented Jeff Marx, is a college buddy of mine. So am I biased? Probably. But does that make the show any less awesome? No.

Don't take my word for it. Ask one of the literally millions of people who've seen it in New York, Las Vegas, London, on its U.S. tour, or in its many foreign-language incarnations around the world. Or heard its hilarious, catchy soundtrack. They can't all be Jeff's friends, though you might think so if you judged by Facebook.

For that matter, Avenue Q beat Wicked for the 2004 best musical Tony award. The Tony voters didn't all go to school with Jeff either. In fact, the Wicked composers and stars were far more established in Broadway circles than the then completely unknown Q team. But the better show won. (Even if I'd seen Wicked I would still feel that way.)

Avenue Q is going out in style with a celebratory final month, including performances this morning on Fox TV's Good Day New York and this evening on NBC's Late Night with Jimmy Fallon. Check it out.

If you haven't seen the show, you've got one more month. Go. It's so, so good. If you aren't completely satisfied, I will personally refund your money. (Offer only applies to people I actually know. Sorry, Internet randoms.)

Congratulations to Jeff, who remains a loyal friend and one of the best guys I know despite his world-beating success; his co-creator Bobby Lopez, another terrific guy; and the whole Q crew. You did it your way and triumphed beyond anyone's wildest dreams, and you so deserve it.

It's been gratifying to watch it all unfold and a privilege to come along for the ride as you generously shared the experience with so many of us. I'm just one of countless friends who are deeply proud of you. Way to go!
Posted by Ben at 5:40 PM

I saw it in New York last summer, on a trip with my sixty-something mother. We both loved it. She described it as "bawdy" and I thought it was, in a word, fabulous!