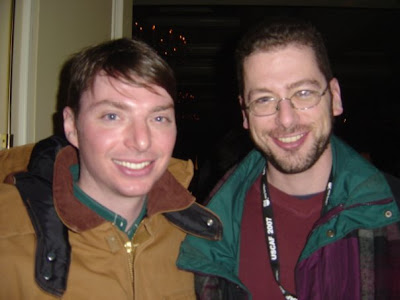 Michael Patrick O'Brien, better known and widely beloved as POB, has been hired to the Saturday Night Live writing staff, reports Darel Jevens of the Chicago Sun-Times.
This is wonderful news. Pat is just a great guy, thoughtful and kind. More importantly for comedy audiences, he's endlessly creative, wildly original, deeply committed, slightly crazy, and constantly hilarious.
Setting aside his years of exemplary work on improvisation stages, he proved his writing mettle when he put on a one-man tour de force last summer at Second City that I wrote about here. Along with Dratch & Fey and Piñata Full of Bees, it was one of the flat-out best sketch comedy shows I've ever seen, and I've seen a lot of them.
I went through a year of improv classes with Pat at the iO Theater (né ImprovOlympic) and loved every hour we spent together there. Among many fond memories, the single best improvised scene I was ever in was one between Pat and me that I can practically recite word for word eight years later. It blew the roof off the Del Close Theater, drawing a series of explosive laughs from the hundred-odd people in attendance, and it was all because of Pat. I'm not being falsely modest, it was all his brilliant idea and I just played along. What's more, he literally dragged me onstage by the cuff of my shirt to start the scene, so much did he want to include me in the moment. I'm still grateful.
Pat was deserving of the big league callup to his current job, that of Second City Mainstage player, as I noted in my review of their current show. Happily, he did get the call, and the Pipers Alley institution marked the occasion with a video interview of Pat that you can check out here.
The Mainstage is the highest you can rise in the Chicago comedy scene. In a like fashion, Pat has earned the nod from Lorne Michaels and co., and it's hugely gratifying to see a really, really good guy get such an exciting opportunity. Just the next step among many more to come.
Congratulations, POB!
Posted by Ben at 6:00 AM