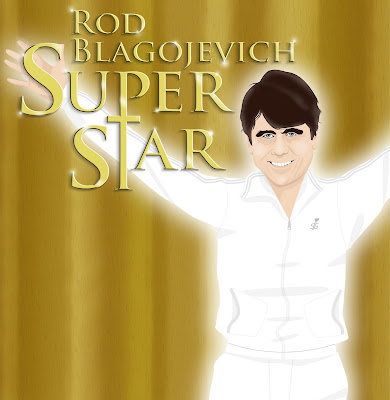 Last night I caught the opening of the Second City's new musical spoof, Rod Blagojevich Superstar!, in which a nationally renowned comedy theater systematically dismantles a nationally scorned laughingstock.
The disgraced governor's travails have been the stuff of high drama, low motivations and middlebrow speechifying, but with most of the public wrangling behind us (on the civil side, anyway), it's time to salvage a little fun from a six-year political catastrophe.

A Second City parody was probably inevitable. They're known for their political currency, and having offered their takes on Hillary, Barack and McCain, they now turn to a man I'll call, for lack of a more apt national equivalent, the George W. Bush of Illinois.

The show's press release says, "Rod Blagojevich Superstar! is what happens when talent and producers drink too much at the Second City holiday party, begin to brainstorm ideas and decide to write, compose and open a show in 2 weeks."
I like the casual self-deprecation, but just because the show was assembled quickly doesn't mean it feels thrown together.  With all the last-minute corporate gigs they get, the Pipers Alley crew is used to working fast, and given such a sacrificial lamb ("Milorad Blagojevich" being Serbian for "comedy gold"), they skewer him as surely as they usually do the middle management at the local Fortune 500.
Rod Blagojevich Superstar! is energetic and entertaining, and at 55 minutes briskly and efficiently takes its subject apart piece by piece. The ambition, the arrogance, the certitude, the nepotism, the defiance, the delusion, the self-pity, the inevitable fall from grace, they're all in there. (Wait, why did I call the Bush thing inapt?) It's the public flogging we've all been yearning for.

Book writer Ed Furman and composer-lyricist T.J. Shanoff find room for every major Blagojevich headline (read: debacle). Still, it's not just a recitation of leadership gone awry; there are solid jokes here. A boastful Rod declares, "I'm the greatest Serbian politician! Outside of Serbia. And Ohio." He tells Roland Burris, "Being black to court the African-American vote, that was genius on your part."

Some jokes, meanwhile, write themselves; Patti Blagojevich could only be cast as a profane Lady Macbeth. Her coarse argot is a one-note gag, but the note is amusing enough and she demonstrates an estimable vocabulary.

As for her husband, the show reminds us that he's risen far past his station. After graduating "in the top 100 percent" of his class at Pepperdine, a "party law school," Rod marries Patti Mell and accepts her father's invitation to join the Chicago Democratic political machine. Thus begins the ride.

Rod Blagojevich is neither a skilled politician nor, by all appearances, a well-adjusted person. He's some guy who married the daughter of a powerful Chicago alderman. Without Dick Mell as his political godfather, he never gets Dan Rostenkowski's old seat in the U.S. Congress, and without that entry-level job (!), never ascends to the Governor's Mansion. The show delivers these hard truths.

Meanwhile, Blagojevich's deep denial plays for laughs. He muses, "Since when is breaking a few laws illegal?" Told he's out of control, a rampaging Rod retorts, "Control is out of me!" Confronted with a litany of his misdeeds, he offers in defense, "Those are your words."

Bottom line, Superstar serves up exactly what its ticket buyers will be looking for: a big fat helping of whole roast Blagojevich.

A Second City opening night crowd generally reflects Chicago's theatrical and critical establishment: reviewers from major press outlets, friends and colleagues of the home team, and the occasional Hollywood notable. While the usual suspects were in attendance, so were such members of the media-political complex as Carol Marin of "Chicago Tonight," WBBM-TV political reporter Mike Flannery, and the Honorable Lisa Madigan herself (accompanied by her husband, New Yorker cartoonist Pat Byrnes). I asked her what she thought of her own depiction and she was a good sport, saying she could have come off worse.
My sense was that the pols and newshounds, having served with and covered Blagojevich, were there to make sure Second City really dismembered the guy. There was so much schadenfreude in the room I was waiting for a tap on the shoulder from Justin Kaufmann.
I saw Superstar hours after returning to Chicago from a trip to Will Ferrell's Bush roast on Broadway.  The Blago show was oddly reminiscent of the national version.  It was like writing checks at tax time, state and federal variations on a theme.

My Flavorpill preview will surface in the next week or so, looking something like this:

The freshly ousted governor of Illinois exploited its top job, squandered its treasure, hamstrung its legislature and tarnished its reputation. Rod Blagojevich is a big fish in a shallow barrel, but that doesn't mean we shouldn't fire away. If laughter is the best medicine, Second City's cathartic swipe at America's easiest target should help Illinois recover from a chronic hemorrhage of statesmanship, and since we can't get back those millions Blago illegally spent on FDA-rejected foreign vaccines, satire may be our only cure. This show is billed as a takeoff of '70s rock musicals like Jesus Christ Superstar; in that spirit, it amounts to a public crucifixion.

You can find more information and buy tickets here.
Posted by Ben at 10:00 PM

I have never wanted to go to Chicago more than I do now that I've read this. Maybe I'll catch it before it closes...but unlikely.

I have never wanted to go to Chicago more than I do now that I've read this. Maybe I'll catch it before it closes...but unlikely.

You never know. From what I hear, advance sales are good and the show could enjoy a nice long run. His upcoming criminal trial will keep him in the news and if people keep coming around I'd expect the show to be extended indefinitely. They're also thinking of touring it, to Springfield at a minimum and maybe elsewhere. A lot of people downstate are interested judging from the 20 or so governor's office employees who attended a preview last week, not to mention the traffic I'm getting.