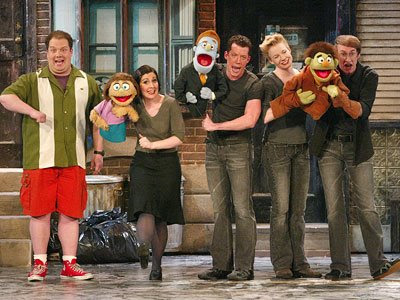 I recently wrote about the Avenue Q "For Now" lyrics contest, in which the long-running Broadway hit invited fans to suggest a replacement line for the then-almost-obsolete lyric "George Bush is only for now."

A judging panel including co-creators Bobby Lopez and Jeff Marx and the show's producers weighed the over 2000 submissions, ultimately selecting these four finalists: "Recession" debuted on Inauguration Day, appropriately, and the other three finalists will soon rotate in. After the people have spoken (i.e., laughed, or failed to), the creative team will settle on a winner. Read all about it here, or a longer version here.

My submission ("Gas cars") didn't make the cut, but since my college buddy Jeff Marx gave me a backstage tour and let me play with the puppets shortly after the show opened on Broadway, I've already had my fun. Besides, my line wasn't really a laugher, more of a thinker.

Further evidencing the "only for now" thing, just one member of the original Broadway lineup pictured above is still in the cast.

If you haven't seen Avenue Q yet, heed the advice of #3 above and check it out while you still can. It's a great, great show.
Posted by Ben at 8:02 AM