Too little too late 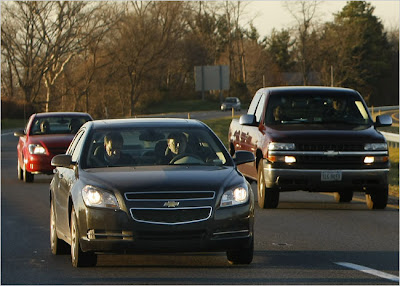 Sorry, buddy. Not interested in throwing $25 billion of taxpayer money at your problem, only to watch you burn through it and come back in six months and ask for more. I think I also speak for the rest of America on this one.

Way to go, though, on not taking three separate private jets to Washington on your second visit. We're all impressed at the humility you found only after being buried by the collective scorn and derision of the entire world.

If you really need some cash, roll over and ask the people you've been in bed with for decades, the oil industry. They made money hand over fist during the SUV era (ExxonMobil cleared $40 billion in a single quarter). Having ridden you like a raft to the promised land, surely they'll be happy to bail you out.

Maybe your going out of business isn't such a bad thing. Toyota and Nissan seem to be doing all right and they make better cars than you do anyway. The market has spoken.

I have yet to hear a proposal from you or any of your Detroit cohorts that sounds anything like a plan to make the Big Three viable and competitive or reduce their dependence on foreign oil. If only you all hadn't killed the electric car twenty years ago.

You personally made $25 million this year, so you'll be fine in your Grosse Pointe mansion. Wish I could be so dismissive of your thousands of former and current employees whose jobs and/or pensions aren't looking too secure these days.

Sincerely,
Another guy who hates you
Posted by Ben at 8:01 AM