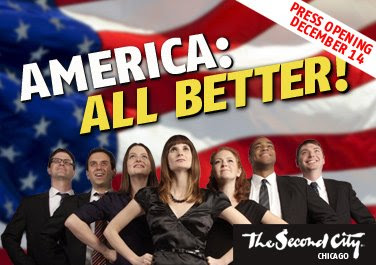 Last evening I had the pleasure of attending the opening night performance of The Second City's 96th Mainstage revue, America: All Better!

Great title for a show born in post-November 4 euphoria, and it lives up to it. My Flavorpill preview will surface in the next week or so. Until then, here's a preview of my preview: go see this show.

It's got everything you'd want from a night at Second City, pouring on the funny with smart jokes, a self-assured cast, crowd-pleasing songs, punchy one-line blackouts and solid, unhurried relationship scenes. A nice balance between silly and sophisticated, topical and timeless.

It all unfolds on a minimalist set with Second City's trademark monochromatic costumes. It's the little things that grab your eye, the syncopated entrances and exits, the time-dashes and subtleties that can ennoble and elevate a show, and do here.

Director Matt Hovde proves his recent smash Campaign Supernova! was no fluke by delivering another winner. If Supernova was a home run, America's a solid double in the gap. Come to think of it, Hovde also directed the well-received Mainstage revue Between Barack and a Hard Place. Having swung at three pitches, he's batting 1.000.

I like the writing choices the cast has made. Yes, they've got the obligatory Obama bits (and found room for a swipe at Blagojevich after his scandal broke during previews), but Second City roundly covered the presidential race in their past few shows. This time they take a road less traveled, scoring with a funny running gag starring Rahm Emanuel as the badass political fixer he pretty much is in real life.

They do return for the umpteenth time to that local pot of comedy gold, Rich Daley, but find an original angle as the mayor clumsily pitches Chicago's candidacy for the 2016 Games to an unimpressed International Olympic Committee. More broadly, America acknowledges our troubled times, but sparingly enough to let us forget them for a while.

The full-cast scenes, long a signature of Second City, also hit paydirt in this go-round. The show opens and closes with very different classroom sketches; both work. The second act begins with a group therapy session set in a prison; it's layered with good punchlines and better tossed-off follow-ups.

I'm chuckling just reading over my notes. The elegant Shelly Gossman as a too-polite professional wrestler; jaded Joe Canale as the last polar bear, doing some nifty crowd work interviewing an audience member about climate change; Anthony LeBlanc's amorous interracial slow jam getting big laughs rhyming "my baby's mama" with "let's make our own Obama"; feisty Emily Wilson as a wedding DJ with a poor sense of repertoire; a loopy Cornel West pontificating on MTV Spring Break; Brad Morris chipping in two cute turns as a guy on a date; "The Chicago Cubs are one strike away from winning the World Series! What could possibly go wrong?"

Though his oblique, offbeat sensibility recalls few of his forebears on this stage, O'Brien's writing chops and committed intensity are huge assets. The one-man show he mounted at Second City e.t.c. last spring, Shatter, was a bravura showcase of A+ material, some of the best sketch comedy I've seen in years. It earned him this gig and he shows why throughout. His enjoyable running bit as a macabre doomsayer, for example, provides context and ties the show together.

Update:  My Flavorpill preview is here.
Posted by Ben at 10:16 AM