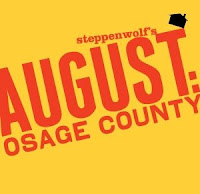 August: Osage County is headed for the silver screen, the logical next step for a play that's lit up the American theater.

It all started right here in Chicago last year, when Tracy Letts' family melodrama premiered with a red-hot run at the Steppenwolf Theatre. Tickets sold out weeks in advance as national critics sprained their writing hands trying to out-rave each other.

It soon became apparent that the show was Broadway material, and to their credit, producers transferred the entire production to New York intact. It's become routine to replace serious stage actors with movie stars when straight plays move from the hinterlands to the Great White Way, but August's original cast and crew moved wholesale. The producers' faith in them was rewarded when the Broadway production earned more positive notices and an armful of Tony Awards. Letts also took the Pulitzer Prize for best drama.

Next up, the Hollywood version. Former Miramax chief and now Weinstein Co. head Harvey Weinstein bought the film rights and will produce the big-screen adaptation. You may remember Harvey from his recent turn playing himself on Entourage (or wait, I think that was his brother Bob).

Congratulations to producer and FOBB&B Steve Traxler, who was as responsible as anyone for bringing the show to Broadway, and who will serve as a producer on the movie version.

Here's more from an industry publication:

TWC heads to 'Osage County'; Weinstein, Doumanian, Traxler to produce [Variety]
Posted by Ben at 8:16 AM

Huzzah for Steve and Steppenwolf! I won't even be upset when the film is inevitably not as powerful as the play (it just seems impossible) because just getting the deal is huge for all involved. That said, I have high hopes. And here is my vote to have all of the original cast in the film.

"Please take a moment to consider how rare it is to see those words together: prize-winning, hit, play. There are prize-winning plays, but they are rarely hits; there are hits in theater, but they’re rarely straight plays. So a play that’s both critically acclaimed and that audiences also love is about as common as a short Judd Apatow comedy."