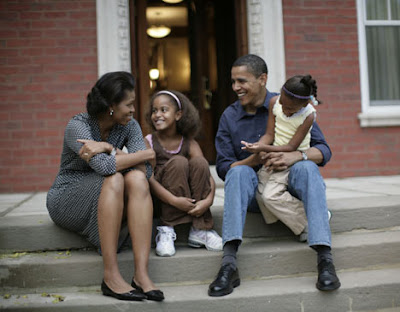 Chicago's been an interesting place from which to take in the election and its consequences.

I sat out the election night Grant Park mob scene, although my brothers and seemingly half of my friends were there. As much as I love people, I hate crowds (being stranded in them, at least), and I'm content being merely near, not at, history as it unfolds. I'd rather watch the returns on TV, bouncing among the various networks, pundits and politicos. If the Cubs made the World Series I'd probably feel the same way.

Chicago's still getting used to all the attention. From time to time, of course, the national spotlight shines on us: Siskel and Ebert proved this wasn't showbiz flyover country; the Chicago Symphony Orchestra is often called the nation's best; Mike Royko, Ann Landers and Bob Greene wrote for our dailies but were widely read in the provinces; Paul Harvey broadcast to millions from here each day; our options and futures markets lead the world; Michael Jordan made this the basketball capital of the 1990s; the University of Chicago boasts something like 81 Nobel laureates and counting; and our queen bee presumably wouldn't mind if we renamed this place Oprahville.

But when it comes to national affairs, Chicago usually takes a back seat to other cities: D.C. for politics, N.Y. for culture, L.A. for weirdness. Although we've hosted a lot of political conventions over the years, mostly back when they actually used to nominate presidents, the presidents themselves have come from somewhere else: Midland, Little Rock, Hyannisport, Yorba Linda, Plains. Downstate Illinois produced presidents Lincoln, Reagan and Grant, but Hyde Park as the home address of the commander in chief? That will take a little getting used to.

I'm loving the Chicago flavor of it all, the congratulatory banners hanging from lightposts, the off-duty Windy City cops helping to protect the man of the moment, the excitement of quasi-presidential motorcades shuttling around town. Few were surprised when Obama named a longtime ally, U.S. Rep. Rahm Emanuel (D-5th), as his chief of staff. A loyal foot soldier in the Beltway wars, Emanuel started his political life as a fundraiser for Rich Daley before serving as an adviser to President Clinton and succeeding Rod Blagojevich in Dan Rostenkowski's old House seat. Unlike Obama he's a lifelong Chicagoan; his dad was a well-known North Side pediatrician.

On the pop culture side his brother Ari Emanuel, a top Hollywood agent, was one of the inspirations for the Ari Gold character on Entourage, and Rahm himself is said to be the model for vote retriever Josh Lyman on The West Wing. "Rahmbo" also volunteered in the Israeli civil defense force and until I hear otherwise I'll continue to assume he can kill a man with his bare hands. I live a block away from the guy and I'm glad we only rarely run into each other. I find Rahm Emanuel a profoundly scary individual but I'm glad he's on our side.

Me, I wouldn't have minded seeing Emanuel, until last week the head of the Democratic Congressional Campaign Committee and the fourth most powerful House member, stay right where he was. He's been pretty impactful in that job, twisting arms to get congresspeople in line, allocating money among House races and recruiting candidates to run for seats in vulnerable GOP districts. He had as much to do with the Dems' sweeping 2006 congressional victory as anyone. 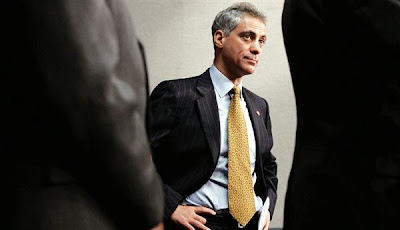 Emanuel would have been a major asset on the Hill helping shepherd Obama's agenda through Congress. Then again, it's hard to imagine a more effective chief of staff—he's tough as nails, well-connected, and one of few Democrats with significant congressional and White House experience—and he's earned the executive branch glamor gig. So have other party stalwarts like Joe Biden, Hillary Clinton and Bill Richardson, and they're all getting theirs.

Some Republicans have already been heard to gripe that by choosing a tough-minded chief of staff, Obama betrayed his own promise of a new style of politics. Waah. If that's the worst you can say about the president-elect, as opposed to the things I could say about the current guy (the "president-unelected"), that's good news for all of us. Anyway, you should be happy Obama picked a ballbuster to coach the team. Maybe it will help undo some of your damage.

More generally, after years of cringing in anticipation of, and then being depressed by, pretty much every major presidential decision, what a pleasure to have complete confidence that whoever Obama appoints to his cabinet will be fit for the job. Or that his economic stimulus proposal will be well thought out (not to mention blessed by the likes of Paul Volcker, Robert Reich and Warren Buffett). Or insert your issue of choice here: stem cell research, CIA torture at Guantanamo, energy independence, early childhood education, global warming, health care, Iraq, Afghanistan, Pakistan, Iran. Of course, all of these are issues of choice.

The president-elect is deeply impressive in many ways, chief among them his judgment. He is known for listening to all sides, particularly to those who disagree with him, before rendering a decision (compare that to the current president, who cares to hear only from yes men and Fox News, and who lets his staff summarize the newspapers for him). As for the quality of the decisions he so renders, Obama hasn't come close to disappointing me yet and he seems like the kind of guy who never will.

This is not some left-leaning Pollyanna merely hoping it were so, although of course I do. I've been following Obama's career with increasing interest since he was in Springfield and he's given me plenty of reason to believe he's the real deal. People who knew him a lot better and a lot earlier feel the same way (his fellow Harvard law students called him the future president, and admiringly). When I heard Eric Holder was Obama's choice for U.S. Attorney General, the name only vaguely rang a bell, but my knee-jerk reaction was pretty much, if Obama likes him then so do I.

For the record, Holder was the number two guy in President Clinton's Justice Department and prosecuted Rostenkowski for breaking federal laws; the blemish on his record was his signing off on Clinton's controversial pardon of shady financier Marc Rich on the way out of the Oval Office. Holder has since apologized for that miscue and has enjoyed a successful and well-regarded prosecutorial career. Compare him to President Bush's first two Attorneys General, the venal fundamentalist John Ashcroft and the longtime G.W. Bush factotum Alberto Gonzales. There's no comparison. 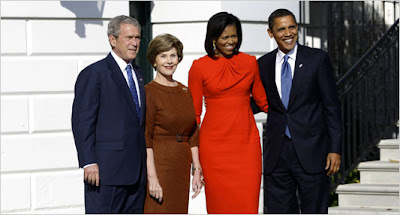 Different as they will be, there is of course an inevitable overlap between the 43rd and 44th presidencies, and to Bush's credit, he's apparently been a model of accommodation and generosity in assisting the transition along. When the Obamas visited the Bushes at the White House, I found the body language striking. It was Obama who athletically patted Bush on the back, not vice versa as one might have expected from the incumbent, Obama as the older brother, Obama who seemed presidential. It was easy to see his backpat as a gesture of forgiveness, an absolution. I was reminded of a moment at the end of the sixth Harry Potter book when a scared young student, in over his depth, ostensibly holds the reins of power, but his professor, although technically in a position of vulnerability, is actually in charge. And they both know it.

What's also nice is that Obama and company will mostly remain in Chicago during the transition period. After 22 months working the road, they're entitled to a little stability, at least geographically, during this time of upheaval. There's something to be said for sleeping in your own bed and getting to wake up to your family, as Obama told Steve Kroft on 60 Minutes during his first post-election interview.

It was a pleasure to watch an hourlong substantive conversation with the Obamas. They came across as the unflappable, self-assured people they are, deserving of and ready for the challenges before them. What a luxury to have a president who radiates charm and intelligence, who seems to feel humbled by and aware of his place in history, who continually evidences a firm command of the issues we face, who is regarded with delight rather than apprehension by people throughout the world, who can speak in complete sentences. Not surprisingly, the interview delivered 60 Minutes' highest ratings in nine years.

Extending its triumphant return to hard news coverage, 60 Minutes followed up the big Obama get with a nifty roundtable featuring the Obama campaign's four top officials, taped late election night with victory still hanging in the air. Their discussion of how they turned red states blue, dealt with the Rev. Wright explosion and took their cues from their candidate was compelling television. Both of these fine pieces are available for viewing at the CBS News website.

The Os are taking their kids to school one day, grabbing a dinner date the next, trying to maintain a semblance of a normal life amid the security briefings and fact-finding visits to D.C. schools. Obama and adviser Valerie Jarrett walked into the landmark downtown deli Manny's on Friday and bought corned beef sandwiches and potato pancakes to go, an act that would have been somewhat more routine had they neither been accompanied by several dozen reporters and photographers (which is how you and I heard about it) nor greeted by a restaurant-wide round of applause. But such is life when you're the next president.

Soon enough the transition period will be over and the Obamas will be off to Washington. For now, though, the golden glow remains.
Posted by Ben at 9:15 PM

Ben, brilliant meditation on the Obama glow and his Chicago penumbra.

Heck of a nice write, Benny.