The stars were shining in Chicago last night. Sure, you had your Brian Urlacher, Devin Hester and Donovan McNabb doing their pigskin thing under the lights at Soldier Field, but a few miles to the north, another bunch of all-pros gathered in Old Town.

The Second City comedy theater is an American institution since 1959. Every night it presents a scripted sketch revue followed by a "set," a group of improvised scenes in which current cast members work on characters and scenarios for inclusion in future shows.

On this night, the regular cast stepped aside for an "alumni reunion set" in which eight performers from circa 1968-72 reunited for an impromptu one-time performance of their classic scenes. The place was packed and the alums delivered the goods, taking the crowd back to a time when our country was mired in an unpopular foreign war and gas prices were out of control. How things have changed. 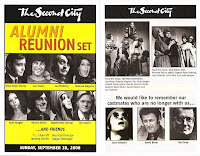 Probably the most familiar face in the reunion cast was Harold Ramis. Back before he played a skinny Ghostbuster and a sardonic Army recruit, he simultaneously held not one but two Chicago dream jobs, working as an editor at Playboy magazine while performing eight shows a week at Second City. After making his name in Hollywood, he returned to Chicago to raise his family.

Ramis was just one of the gang on this night. They quickly shook off the rust and found their rhythm, banging out the old school bits with the confidence of longtime pros. Some of the laughs came through the time warp, with a 55-year-old son in a family scene and anachronistic references to ditto machines and four-dollar movie prices (which I think meant two admissions); other sketches were such timeless tropes as a nutty funeral and a fast-talking, wordplay-rich monologue.

Although much of the audience (including the current mainstage and Second City e.t.c. casts) was unborn the last time these troupers hit the Pipers Alley stage, everyone appreciated the singular gathering. You know it's a big night at Second City when co-founding former owner Bernard Sahlins comes out and the likes of Tim Kazurinsky show up and don't even perform. There was a certain electricity in the air. Happily, the show wasn't just a nod to history, it was also funny.

Second City being what it is, these special nights happen there from time to time. Sometimes they're spontaneous: when alumnus Mike Myers was in town a few years ago to promote a Shrek movie, he brought his costars Cameron Diaz and Eddie Murphy to the theater to take in a show. They all jumped onstage afterward to play the set with the cast.

The reunion set was planned well in advance, with cast members flying in and rehearsing over a period of days. As rumors spread of the unusual event, Second City tried to comply with the cast's wish that the show not be promoted, advertised or otherwise big-dealed. Inquiries from local journalists went unanswered as producers studiously neither confirmed nor denied. In this spirit, I agreed not to alert my literally tens of readers.

Anyone who'd heard about it, though, could walk into the set for free to find out whether the rumors were true, and those who showed up were rewarded with a memorable evening.

As ever, literally and figuratively, thanks to Second City for all the laughs.

Sweet! And nice pic of you with Obama. He's the one on the left, correct?