Knowing is (just) half the battle

I was recently invited to play in an online trivia contest called the LearnedLeague.

You play a six-question head-to-head match against a different opponent every day in a season comprising 25 such matches. After each season, depending upon performance, players may be promoted or relegated to higher or lower divisions, and at the highest rank, an overall league champion is crowned.
The unique element of LearnedLeague is that a match includes both offense and defense. The offense part is straightforward: you try to score points by answering the questions correctly.

The defense part is both elegant and strategic: you assign points to the questions for your opponent to earn (or preferably not earn). Each day you distribute a 3, 2, 2, 1, 1 and 0 based upon what you think your opponent will know. You'd give your opponent 0 on a gimme, and 3 where you're sure they won't know it.
It works like this: 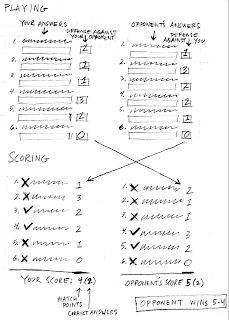 Defense can and often does decide matches. It's routine to get the same number of answers correct but lose a match, or get one more correct and tie; also possible to get one more correct and lose; and even possible, although rare, to get two more answers correct and still lose due to catastrophically bad defense (known as "Bucknering" a match). On the offense side, answering all six questions correctly is known as "drinking the beer," i.e. scoring a six-pack.

My rookie season started several weeks ago and I've been having myself a time playing it, so I've decided to write about the daily ups and downs in this space for three reasons:

A, it's interesting, at least to me;

2, it gives me something to write about, which turns out to be a big thing for people who would attempt to write regularly. Hell, Hemingway moved to Europe, with its bullfights, moveable feasts and café expatriacy, so he'd have something more interesting to write about than Oak Park, Illinois, the hometown whose "broad lawns and narrow minds" he derided.

I tend to be one of those people who have a lot to say, and yet I wouldn't presume to blog most of it. There are a great many blogs on specific topics (sports, crossword puzzles, politics, border collies, public transportation, restaurants; insert your list here) and I have always felt a measure of envy toward those bloggers for whom the world supplies an unending supply of new fodder. Those of us in the unfashionable category of general interest blogs are left with our wits, thoughts and such parts of our lives as we wish to share (insert up to three jokes here) to fill the white space. Writing about a daily trivia league provides a small but fresh measure of new grist for the mill each day;

and C, as regular readers will have noticed, there has been a marked decline of late in the frequency with which I update this blog. After four years of dedicated banging away, I've been feeling increasingly burned out over the past few months, and my annual fall busy season at work has been more than reason enough to take a break. Now that things are quieting down and I've had a little time off, I'm ready to get back on the stick.

And so—with apologies to FOBB&B Eric Berlin, who has been blogging about the daily LearnedLeague experience for some time, and to any other LLer who has been doing likewise unbeknownst to me—I now undertake to do the same.
Posted by Ben at 11:00 AM

That thing is probably out of my league, despite my horrifying trove of trivia.