Texas A&M led the nation this year with 44 sacks thanks in part to my favorite Aggie, the 6'5", 295 lb. senior defensive end Ben Bass. At approximately the same height and weight give or take a hundred pounds, we're basically identical twins. The guy even has the right middle initial, J.

True to form, the blue-chip pass rusher out of Plano West High School sacked my law school alma mater Northwestern's elite quarterback Dan Persa in the first quarter of today's Meineke Car Care Bowl of Texas in Houston. Good old #90 and his crew were up in Persa's grille all day.

Although I support all Ben Basses on principle, I wasn't too excited about the fierce game he played. Neither were my hundreds of fellow purple-clad Northwestern fans in a jammed North Side bar, a boisterous crowd including former quarterback C.J. Bacher (still protected by his teammates on the O-line) and former university president and basketball junkie Henry Bienen. 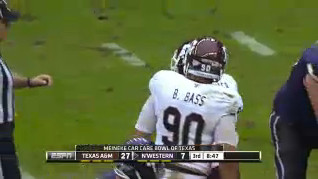 Above is a screenshot of my namesake in today's game, complete with not just Bass but "B. Bass" on the jersey because his brother Justin Bass is a freshman on the team (not to be confused with my brother Justin Bass). I'd have liked to get the "and Beyond" on there but I couldn't reach the Aggies' equipment manager before game time to offer a generous bribe.

With today's loss, Northwestern ran its unfortunate streak to 9 straight bowl game losses since beating Cal in the Rose Bowl after the 1948 season. On the plus side, NU has made it to postseason play 9 times in the past 17 seasons, including the past 4 in a row.
Posted by Ben at 4:00 PM