I've never had a YouTube account. My inclination to shoot video is so negligible that, for example, the game-changing Flip camera was released, became insanely popular, gradually cooled off, and was eventually discontinued — all before I ever thought about getting one.
I recently felt like posting a comment on someone else's video, which required me to register a username on the site. I tried to choose the name "benbass" and here's what happened: 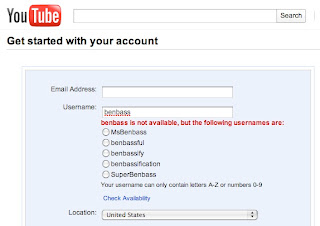 As you can see, YouTube replied that the name "benbass" was unavailable, surely due to my many imitators, but suggested various other options:
Apparently, YouTube really is all about you.
Posted by Ben at 8:00 AM

I have a really nice shot of a bass I caught on my blog....

Hmm, there are some directions one shouldn't go, however.

This was how I felt when I found out 'Mean Old Lady' was taken as a blogspot registration. Not in use, just reserved! So unfair.