_
Frank Sinatra was into crossword puzzles.

After his name appeared in the New York Times crossword in the early 1980s he wrote a thank-you note to puzzle editor Eugene T. Maleska, starting a friendship that lasted for many years.

Here's a letter he wrote to Maleska about his first brush with crosswords as a Hoboken teenager: 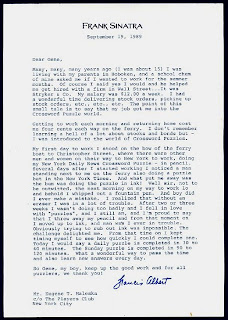