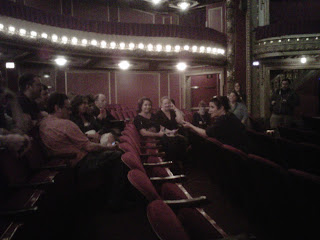 Of course, it may not have been entirely altruistic in that the assembled Qers were (a few) journalists and (a lot of) bloggers in a position to promote the show to a wide audience. Attending on behalf of both Flavorpill Chicago and this blog, I wore both hats.

Far be it from me to criticize, but my fellow scribes roundly failed to make the most of the opportunity. Forget asking questions that might evoke interesting responses; they barely asked questions at all, instead attempting to impress Carrie Fisher with racy or "funny" stories about themselves. And at least two of those who did ask questions, offered variations on the decidedly nonjournalistic theme of "Can I please get an autograph [for my husband who likes Star Wars / on my breast / etc.]?"

It was all rather embarrassing, and the uninspired, amateurish discourse is presumably why the Broadway In Chicago staff abruptly cut things short.

Before they did, I dutifully asked Ms. Fisher about her experience filming The Blues Brothers in the great city of Chicago. The first thing she said was the somewhat telling remembrance, 30 years later, that the wardrobe assistant was the cast's go-to person for mescaline. She also tossed in the interesting nugget that Dan Aykroyd asked her to marry him.

My frustration with my fellow bloggers took me off my game a little bit, so I failed to satisfy my curiosity as to whether Ms. Fisher knew the official name of Princess Leia's cinnamon buns hairdo.

But did you get an autograph?
And...where?