A Girl With Sun in Her Eyes 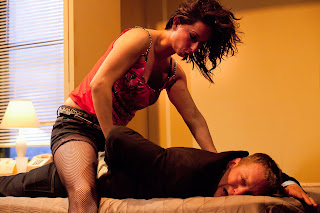 Last night I attended the opening of Pine Box Theater Company's world premiere play, A Girl With Sun in Her Eyes, the story of two Chicago cops investigating a fellow officer's disappearance hours earlier. It's a gripping mystery-drama, written with a confident hand by Joshua Rollins and well executed by a veteran cast. My Flavorpill preview is here.

Pine Box Theater Company is a group of artists who met at The School at Steppenwolf in 2004. They've done some fine work around the city. I caught their production of Kenneth Lonergan's This Is Our Youth in its summer 2007 remount at Theater on the Lake; it mesmerized me.

They've been inactive for the past three years as ensemble members have moved on to other cities, so it's good to see them return with a solid new show. Check it out.
Posted by Ben at 8:00 AM