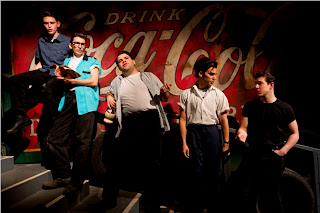 I saw the play on the 40th anniversary of its first-ever performance. Also in attendance were Mr. Jacobs and several of his original cast members including Chicagoan Marilu Henner, all of whom reminisced about the show at a festive gathering after the performance. For the trivia file, Ms. Henner and Jeff Conaway were cast in "Taxi" after being discovered in the national touring cast of Grease.

I highly recommend this show, the buzz for which is growing so loud that the entire run is close to selling out. (An extension is inevitable and an eventual move to another theater is a distinct possibility.)

As I wrote for Flavorpill Chicago:

“Sure, you've watched the movie. Maybe you played Betty Rizzo in your high school's version or caught Brooke Shields or Rosie O'Donnell doing likewise on Broadway. But you've almost certainly never had the chance to see the original version of Grease that played Chicago's old Kingston Mines Theater on Lincoln Avenue in 1971 — until now, that is. Co-creator Jim Jacobs is remounting his most famous play old-school, and the pre-Travolta Grease turns out to be as gritty and real as the movie is light and frothy. The action centers around Chicago's Taft High School (later whitewashed into generic Rydell High for a national audience), with the boy-meets-girl bubblegum of Sandy and Danny just a small part of the clear-eyed depiction of working-class teen life in the late 1950s. Just when you think it's time for "Summer Nights" you get "Foster Beach" and know you're not at the multiplex anymore.”
More information and a ticket link in my Flavorpill preview here.
Posted by Ben at 8:00 AM