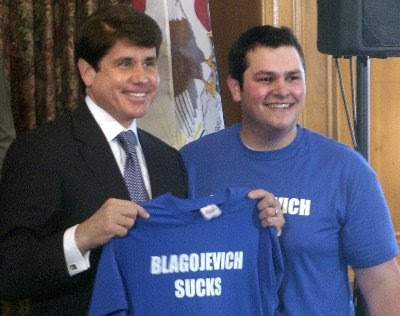 As Chicago Tribune theater critic and FOBB&B Chris Jones reports today on his blog, the Rod Blagojevich psychodrama will take yet another bizarre turn tomorrow morning when the cast of Second City's spoof show Rod Blagojevich Superstar! sits down with Blago himself.

If that weren't weird enough, it will all take place live on WLS-AM, and so promises to be the most excruciatingly awkward radio interview in recent memory. Awkward, that is, to everyone but Rod Blagojevich himself, who seems to have selectively tuned out the collective "We hate you!" of the western world, or else simply hears "hate" as "love."

Even Second City's musical theater bitchslap, featuring such lyrics as "Rod Blagojevich Superstar / Are you as nuts as we think you are?", apparently becomes a vote of confidence once filtered through the funhouse mirror of the ex-governor's mind.

Why else would he welcome to his radio show the very people who have, to widespread acclaim, crystallized and exploited a nation's disdain for him and everything he represents? Does he crave attention so much that he welcomes even this kind? The mind reels.

And speaking of good theater, Rod Blagojevich Superstar! transfers Thursday to the Upstairs Theater at Chicago Shakespeare on Navy Pier for an initial six-week run (but I'd bet on an extension or three).

I attended the opening night at Second City e.t.c., surrounded by a chuckling cadre of Blagojevich colleagues. My full-length review is here; my Flavorpill preview is here.
Posted by Ben at 5:41 PM

Ben: Followed your FB link to the blog today and enjoyed it.

To your query, "Does he crave attention so much that he welcomes even this kind?", the answer is undoubtedly yes. In February, I happened to be on the same United flight as Blago returning to O'Hare from New York (Blago from his Letterman appearance the week after his removal from office and me from a conference). I watched the amusing scene of a dozen people (and no reporters) clustered around him in the baggage claim area, as he signed autographs, took pictures and delivered wisecracks. He was in no hurry to head home and when I left when my bag turned up, he was still holding court as the crowd dwindled. (Somewhat surprisingly to me, the crowd seemed more amused Blago fans than haters.)

Blago's remarkable popularity, in some circles at least, is symptomatic of America's growing inability to distinguish fame from infamy. The creeping proclivity to worship celebrity for its own sake is more widespread than ever.

Those who admire the Skanky Housewives of Orange County; those who ask the likes of O.J. Simpson for an autograph; those who called into Blago's radio show this morning to laud his "courage"; all are of a piece.

I just saw a CNN segment by Jeanne Moos about Blagojevich that featured "Rod Blagojevich Superstar!"

They give the gold in the character?s mailbox, plus avid gamers may easily acquire the eso gold from the mailbox. Live chat services, plus protected payment techniques are offered on this particular store. For knowing more details about elder scroll online gold, you can check out this great site.