...and get ready to compete in Chicago's fourth annual crossword puzzle tournament!

It's all happening Saturday, April 28 at Marbles the Brain Store , just off Michigan Avenue in River North, where another lively afternoon of black-and-whites is literally and figuratively in store thanks to the intrepid Marbles staff and the most pleasant man in Pleasantville, N.Y., NPR puzzlemaster and New York Times puzzle editor Will Shortz.

Here are the deets: 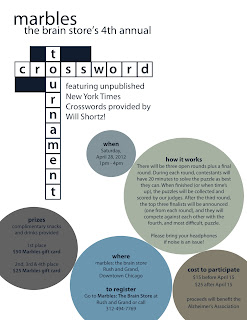 Thanks to Marbles' runaway success and concomitant expansion, there are also tournaments happening the same day in America's second-, third- and fourth-greatest cities. (As if I had to tell you, these are King of Prussia, Penn.; Bloomington, Minn.; and Columbia, Md. )

More information about these tournaments is here.

The tournament puzzles will be from earlier in the week in upcoming editions of the NYT, and therefore easier, so you probably won't need the following. But it can't hurt to be extra-ready, so as a public service, here's a cheat sheet: