The other Super Bowl 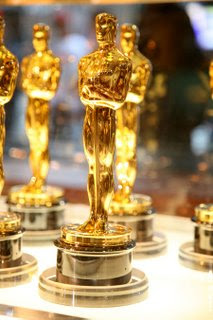 My buds in the advertising world call the Oscars "the Super Bowl for women."

Of course, there are plenty of women who watch the Super Bowl, and men who watch the Oscars, but their point is well taken. Advertisers consider the Academy Awards the best way to reach a huge female audience. All those Clairol ads aren't aimed at me; my hair has long since achieved maximum fabulosity.

The Oscars and the Super Bowl are two peas in a pod. They're

Me, I'll be watching in my signature "1995 Lands' End sweatpants" couture despite having seen, I think, a grand total of zero of the ten Best Picture nominees.
Posted by Ben at 11:00 AM