It's axiomatic: the more humble and appreciative the award-show speech, the more likeable the honoree. 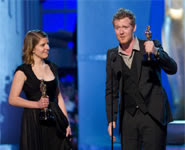 Take Sunday night's Oscar telecast, where the most memorable and touching speeches came from Original Song winners Glen Hansard and Marketa Irglova from the sleeper hit Once. They were huge sentimental favorites going in, as their small movie—shot in three weeks on two camcorders—had charmed critics and audiences alike. Their song "Falling Slowly" typified the film's moving story of two itinerant musicians who meet and forge a musical relationship.

By the end of the show, which featured performances of all five nominated songs, they were also favorites to the casual viewer. Not only was "Falling Slowly" distinctive in its simplicity, it was up against three trite, schmaltzy Stephen Schwartz tunes from the Disney kiddie flick Enchanted and a huh?-inducing song by a cast of thousands from the Keri Russell vehicle August Rush, which for all I know will be coming out in 2009.

When "Falling Slowly" got the nod, it was an emotional release for audience and performers alike. Hansard, a longtime indie rocker and the leader of the band The Frames, gushed his thanks, incredulous that his path had taken him to the Academy Awards. He was so achingly sincere that Jon Stewart ad-libbed his funniest line immediately afterward: "Wow, that guy is so arrogant." Irglova, Hansard's female lead and musical collaborator, also spoke movingly of the struggles independent artists face. 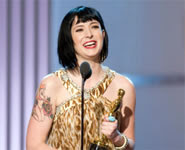 Elsewhere in small-budget movies with fiercely loyal followings, who wasn't charmed by Diablo Cody, the Chicago-born stripper turned screenwriter whose wise, funny Juno script won the Oscar for Original Screenplay? "This is for the writers," she graciously said.

The inverse of the above axiom is also true. Take, for example, a Grammy acceptance speech delivered a few weeks ago by one Kanye West. I didn't watch the Grammys, but heard West's speech replayed in its entirety when it was singled out for ridicule on the Howard Stern show.

In about one minute of lectern time, West managed to (i) observe that within the space of a few years, he had come to own this particular Grammy category; (ii) chide fellow Chicago rapper Common for being so unwise as to release a record during the same year, suggesting that this misstep prevented Common from contending for a Grammy of his own; (iii) argue preëmptively that he deserved the night's biggest honor, Album of the Year, as much as Amy Winehouse and Mark Ronson did; (iv) complain that it was in poor taste for the Grammys to play speech-curtailing wrap-up music as he was thanking his late mother (which might have been a fair point had West not already squandered his allotted speech time on gratuitous boasting, which also waived his claim to the moral high ground and made his lecture about good taste hilarious); and just in case anyone hadn't gotten the message yet, (v) finish with another modest pronouncement: "We run this." 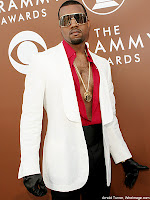 What a tool. How could someone lauded as a modern-day street poet be so completely lacking in self-awareness? Even by the standards of a major recording artist, his arrogance is impressive. When you're in the same room as the collected pop music establishment, including a surviving Beatle and hundreds of professionals whose careers have spanned decades, it might be nice to muster a little humility. Or if you can't, find the grace to pretend to.

A man whose ass has been kissed so thoroughly in the last few years that it must surely by now be concave, West has apparently lost sight of Public Enemy's timeless admonition: "Don't believe the hype."

Happily, not every big-timer acts that way. Look at George Clooney, one of the few celebrities on a pedestal even taller than Kanye West's. As accomplished and popular as Clooney is, he's somehow managed to tune out all the praise; his trip down the red carpet was a study in comportment and self-assurance. The guy is unfailingly polite and charming, quick to give credit to others, with a wink and a self-deprecating joke always at the ready. Anyone can luck into becoming rich and famous; it's Clooney's reaction to his own circumstances that really makes him a star.

And to think I gave props to Kanye West in this space mere weeks ago. Although I occasionally revisit and tweak earlier posts, I'm leaving my Kanye shout-out in its original state as an object lesson to myself, a reminder not to mistake fame for class. Apparently I lost sight of the wisdom once imparted by Das Efx: one must check oneself before one wrecks oneself.
Kanye West would do well to heed the same advice.
Posted by Ben at 11:13 AM

Agreed that Kanye is out of control, but, just the same, that album is ridiculously good.

I rarely watch awards shows, & when I do, I usually lose most interest after the monologue. I might, however, look up Kanye's speech tomorrow if I remember.

In any case, thanks for mentioning Check Yo Self -- Just added it to a massive playlist I'm compiling.

P.S. "the more [GENUINELY] humble and appreciative the award-show speech, the more likeable the honoree."

Pure arrogance is sometimes easier to swallow than false modesty. But maybe that's just me.

Oh God! "A man whose ass has been kissed so thoroughly in the last few years that it must surely by now be concave."

Ben, we love you.

How sweet! Thanks. Now start blogging already so I can return the sentiment in your comment section...